What Your Students Should Learn From The Crucible 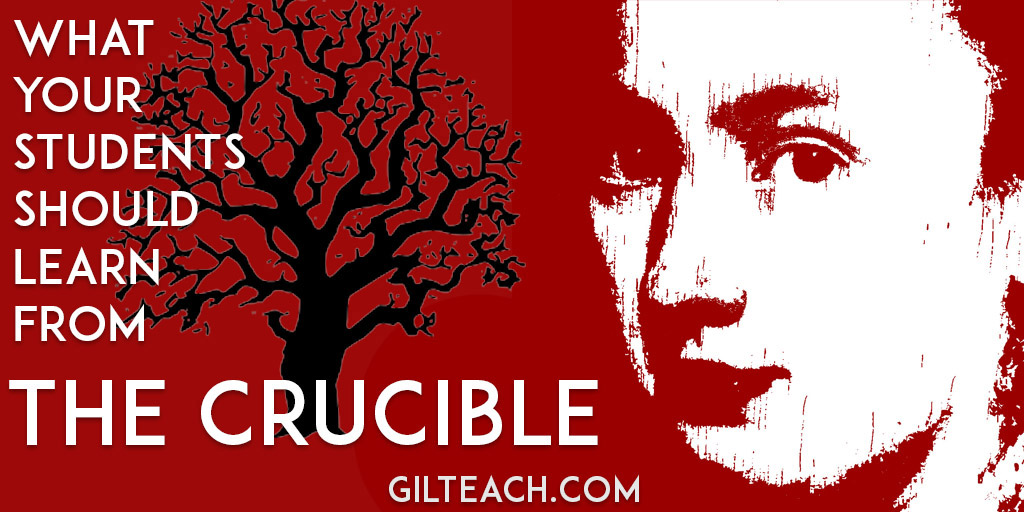 This post originally appeared on the blog Gil Teach.

When you think about what you want students to learn from a powerful unit on The Crucible, think about five years from now. In other words, if you were to run into these kids in five years what would you want them to remember? Would you really care if they remember that Mary’s last name is Warren or how many people were accused of witchcraft or if the residents of Salem owned cows or sheep? If you’re going to spend time on a text, you want that time to change students’ outlooks, broaden their horizons, and empower them with the skills that they’ll need in life. This makes for some lofty goals, but it also gets at what matters in the long term.

What your students should learn from their study of The Crucible by Arthur Miller.

An understanding of the limitations and benefits of the genre of drama. When students study drama, they often seen the play in question as just another book they have to read for English class. One important piece they need to understand is that drama, like any other genre, has both limitations and advantages. And besides examining the elements of The Crucible, the only way that they can truly understand this is by trying their hand at writing some drama themselves—dialogue or character description or designing a set or writing a whole short play.

An awareness of how group hysteria starts and what it means to be part of something beyond your control. While students of today will likely never be accused of witchcraft or have to recite the ten commandments to prove that they have not signed the devil’s book, they might be the victims of group hysteria. They might also unwittingly become a part of the group that is causing that panic. However, by examining the Salem Witch Trials, how they started and what kept them going and how seemingly normal people were caught up in the whole mess, maybe students can avoid that kind of behavior in their own lives. It’s important to make sure that they think about why things happen the way they do. They need to get inside the heads of the characters, to make sense of their actions, and ultimately, to reflect back on themselves.

An idea of the values and world view of Puritan America. Arthur Miller’s version of Puritan New England is pretty great, but just reading one version of a time period doesn’t give students the big picture. So it’s important to supplement a unit on The Crucible with texts from the period as well as with modern pieces that examine the events of those days. Cotton Mather’s writing on good and evil, Anne Bradstreet on marriage and religion, Margaret Atwood’s poem about one of her ancestors who was hanged for a witch, and contemporary non-fiction writing about the events of the witch hunts are all good choices to help them to synthesize ideas and issues.

The confidence to engage in a challenging play on their own. If you lecture students or require them to sit passively in front of power points about their topic of study, you only encourage them to rely on others to do their work and find their answers. Instead, it’s important to get students to work through texts on their own. The teacher is there to give guidance or encouragement—not easy answers. So give them questions on the text, and then let them to the work. You want them to feel like they can go out and see a play by Arthur Miller or any other playwright and not need to have their English teacher sitting next to them, explaining everything that is going on and what it means.

A grasp of the bigger picture and also of the importance of the tiniest details. By teaching students to complete a close reading of a literary passage, you’ll get them to understand how even the tiniest decision about word choice or punctuation or figurative language can make a huge impact. But you also want them to understand the bigger picture—how some themes and questions are universal. So having them spend time writing, discussing, and thinking about those big unanswerable questions is key as well.

Excitement about a really compelling story. If The Crucible weren’t all of the above, it would still be a compelling story that can capture the attention of even the most jaded students. As soon as the Salem girls start confessing en masse at the end of the first act, students are hooked. From then on, the play has everything that it needs to keep them coming back to read more. One of the great joys of teaching ELA is engaging in fantastic stories year after year, and The Crucible doesn’t disappoint on that front.

When you read a text with your classes, ultimately, what you want is for them to have a little bit bigger ideas about themselves and the world around them than they did before they started reading.  You want to push them to expand and grow and maybe be a little challenged and uncomfortable at times all while having fun and being engaged.

Accomplish your goals for this great play by clicking here to get all of my resources on The Crucible. Christina Gil was a high school English teacher for 16 years, but she recently left the classroom to follow a dream and move with her family to an ecovillage in rural Missouri. She blogs about empowering students to find their own answers at GilTeach.com.

She believes that analyzing a poem with 20 17-year-olds is a fabulous way to spend an hour or so, that teenagers should celebrate the epic battles of their lives, and that Shakespeare is always better with sound effects.

When she is not busy milking goats or working in the garden, she can be found homeschooling her two kids or meeting with her neighbors about the best way to run their village.