Oh, the joys and irritations of school picture day. You get a break from your daily routine — but really just so you can stand in line to take what is likely not your best-ever-photograph. Maybe your mother or father dressed you up in something ridiculous. Perhaps you dressed yourself up in something ridiculous. Or maybe it was the year you tried a new hairstyle or “borrowed” your sister’s new sweater (without her knowing). Oops!

We thought it would be a hoot to gather some of the funny stories that inevitably accompany school picture day and share some school photos of TpT’ers you might recognize. So have some fun, and enjoy these tales of school photos gone awry.

My favorite school photo story — A teacher accidentally wore the same outfit for pictures his first two years teaching. After that, it became a challenge. For 40 years, he wore the same shirt and sweater. For some reason, I just love this!

My husband used to be a school photographer so I asked him what was one of his funniest stories — here’s what he said. After lunch the kids came in to take their photos and one boy had no shirt. They had been playing skins and shirts as basketball teams outside. The boy couldn’t find his shirt as the bell rang and off they went to get their photos taken. Once my husband saw the bare young man, he took his shirt off and gave it to him. My husband took that photo while shirtless. Quick thinking!

No picture evidence, but just a phenomenon to share. I’ve coined a term called Picasso Eye Syndrome. I always get my school pictures back angling one eye that is much lower than the other eye. I dread picture day.

OK, so this is a topic near and dear to my heart, because it’s actually going to be difficult to limit myself to just ONE school picture day story. I will go with one about my own children. When my boys were two and four, their preschool had a photographer come in to take pictures. They would also take sibling pictures. I LIVED for the sibling picture. I planned the outfits weeks in advance. My husband thought I was over the top with this issue, so he kept joking that he was going to bring my youngest in wearing this Charlie Brown-like t-shirt that my mom had sent him.

Just to be sure that shirt was nowhere in the mix on picture day, I had already included it in his cubby stash of “oops” clothes. The day arrived, and I had them in matching polar bear sweaters. They were RIDICULOUS… no self-respecting child would be seen in these sweaters on school picture day.

When the pictures finally arrived, I tore into them, and they revealed… my oldest looking pristine in his polar bear sweater, and my youngest looking like Pig Pen in his Charlie Brown shirt. I. Had. A. Fit. The teacher casually said, “Oh. He got wet in the water table that day.”

Moral of the story: This is my favorite picture ever, because my eldest is neat as can be while the youngest continues to walk around in a cloud of his own filth.

One year, picture day was right after I returned from maternity leave. I had been up almost all night with a crying baby. My hair was sticking up in several places, my face was splotchy, and there were huge bags under my eyes. I was so sleep deprived I didn’t care. When the school yearbook picture came out months later, one of my students said, “Oh my goodness, your picture looks like the ‘before’ picture in a makeover. Thank goodness you’ve cleaned yourself up since then!”

In my senior year, a very trusting teacher thought it would be a good idea for my best friend and I to help out on picture day. It was our job to prepare the boards with all the info that would go on the floor in the group pictures (name of school, grade, year, etc). We did an outstanding job… until it came to the staff picture. We just couldn’t  resist. To this day, the staff picture is gracing the walls of school with a board that reads (roughly translated from Afrikaans): “The sickly staff 1998.” Needless to say that from then on, a teacher was put in charge of the boards on picture day.

One year for the staff picture, we did a prank on our principal. We put him in the first row (and clued in the photographer that we were going to have a little fun). Everyone at the last moment put on Groucho Marx glasses for the picture and then immediately hid them. He never knew what we had done until the pictures arrived and he saw his staff all decked out like Groucho! It was a hoot!

It was photo day at our school last week, and I had the idea to try and get my class to do a star jump. As you can see, though, only I seem to be enjoying it. We didn’t get a single successful shot. Only I was up in the air in every single photo. FAIL. I have to laugh about it, because I’m too embarrassed not to! Haha!

Those are Tiny Teaching Shack’s little kittens in the feature photo.

I wrote a blog post last week about my school pictures through the years… shared quite a few embarrassing ones and put myself out there. LOL but hey! I liked this year’s picture, so it counts for something! 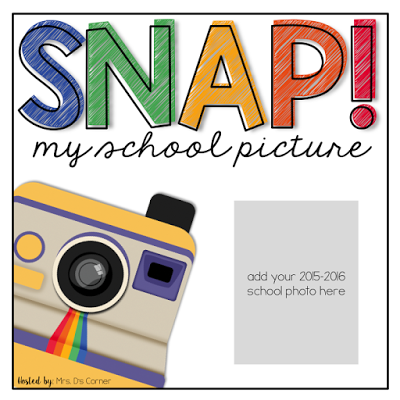 Smile and say CHEESE! Thanks for some great picture day memories, dear TpT’ers.

The pictured TpT’ers from left to right, top to bottom are: