3 Growth-Mindset Principles You Can Teach Your Students Using Wonder 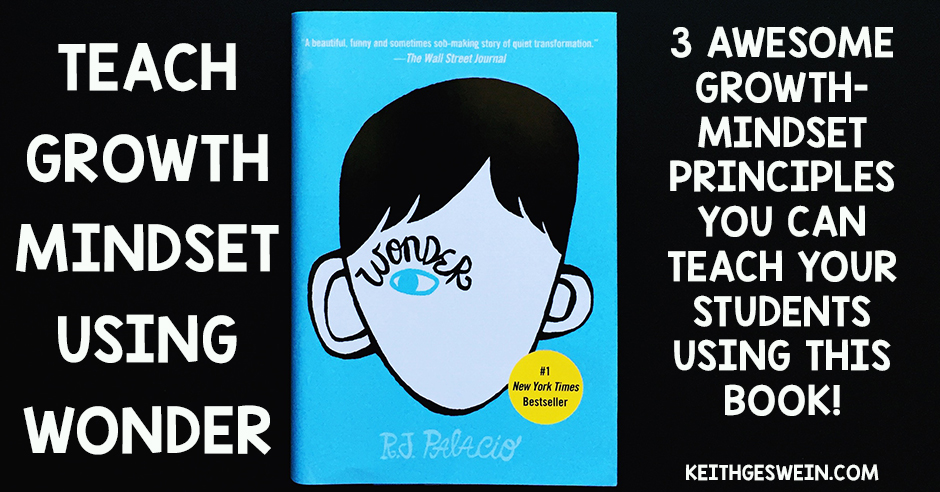 This post originally appeared on the blog Keith Geswein.

Wonder is my favorite book to read with 5th graders! Students’ reactions during key moments are priceless. They pound their desks with frustration about Julian. They cheer when August wins an award at the end. Since students get so hooked on this book, my primary focus is to use the events in Wonder to teach important growth-mindset principles. I teach many reading standards while we read this book, but I feel like those are secondary to the valuable life lessons kids can learn from the characters and events in Wonder. 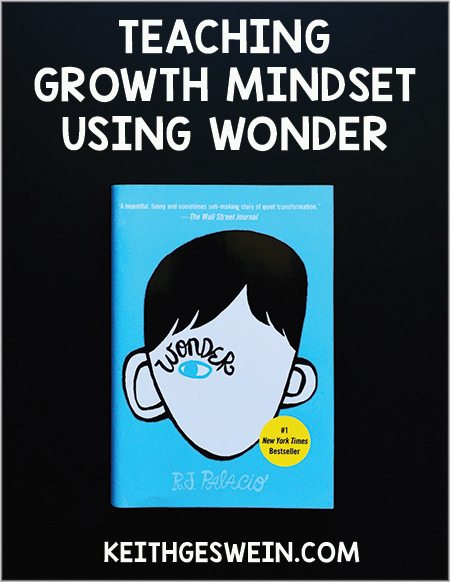 1. Life is full of bad days, but I can get through them.

I’ve taught so many students who get extremely discouraged when tough things happen at school. I hate when students get a couple of assignments returned with low grades, then immediately want to stop working. I feel bad for kids who get teased and feel like they will never make friends. When these things happen, I remind students about August. He wanted to quit school several times during the story. August felt incredible pain when he overheard mean things said by his best friend, Jack. August’s classmates would not touch him because they said he had “the plague.” August experienced so many challenging days! But he bravely marched to school every day and tried his best. Slowly (important word there), August’s classmates realized he had a great sense of humor. They saw the amazing way he handled the hurtful things people did to him. By the end of the book, August earned the respect of his classmates and teachers. He won an incredible award. He had several good friends. For the first time in his life, he didn’t think about his appearance. It took an entire school year to reap these rewards, so it’s a good thing August continued going to school, even on days he didn’t feel like it.

2. I will have arguments with my friends, but I will work hard to resolve these differences. Friendships with good people are worth it.

I love the story of Via and Miranda. I also love how students clap when Via invites Miranda over to her house after the play. I know students have arguments with their friends. I also know that I am probably the last person they would talk to about these arguments. So I periodically remind students about Via and Miranda. These two drift apart once ninth grade starts without ever having a big fight. Via feels awkward around her old friend because Miranda acts differently than she used to. Miranda feels awkward around Via because she feels like Via is judging her. The girls never discuss these things, and as a result, they spend most of the school year avoiding each other. But during the school play, Miranda makes a huge sacrifice for Via and her family. After the play, Via realizes what Miranda has done and invites her over. Both girls realize how much they have missed each other. So I remind students that good friends are worth fighting for. Don’t let unresolved issues cause you to drift apart from a good friend.

3. I will think about the way I treat others.

Almost every student gets angry at the way Julian treats August. They can’t believe that Julian says rude things to August the very first time they meet. Kids can’t believe Julian would treat such a kind boy like August so terribly. All kids realize that August’s appearance is no reason for Julian to say such horrible things to him. I remind students of their realization throughout the book. But eventually, I make the kids accept the harsh fact that they have probably treated someone badly at some point in their life. We’ve all acted like Julian at some point in our lives. I ask them to reflect on that memory, then on Julian’s actions toward August. As fifth graders prepare for middle school, I remind them not to join a crowd of people who are teasing someone who is different. I remind them of their outrage over Julian as to why.

If you haven’t read Wonder with your students, I hope you will find a way to work it into your lesson plans. I know it’s challenging to teach novels because there are not always quality materials to use. So I hope these ideas have given you a few things to work with. There are MANY more events in Wonder that teach growth-mindset principles. I’ve put together over 100 pages of activities that will help your kids connect with the incredible characters in Wonder.  Click the image below to see if they’d be useful for your class. 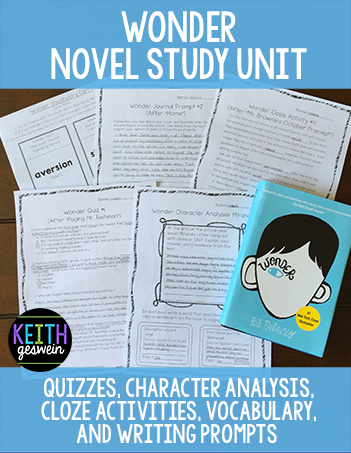 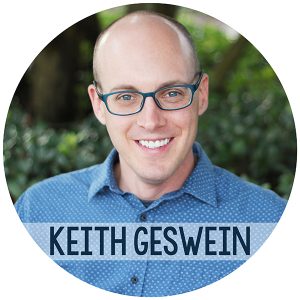 Keith taught elementary grades for 14 years in Texas, China, and Florida. His favorite part of teaching was reading quality literature with his students. He thinks kids can learn tons of life lessons by connecting with a character in a book. Keith loves creating resources that make it easier for teachers to read awesome books with their students. Keith lives in Indiana with his incredibly talented wife, Kimberly (aka KG Fonts!!!), and two daughters. He loves to read, travel, and eat. You can connect with Keith at his TpT store, on his Facebook page, or on his Pinterest page.