Shoo Turkey – A Song for November 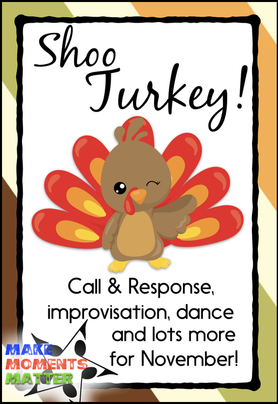 I stumbled across this awesome little gem of a song when I was looking through Bessie Jones’s book “Step It Down” a year or so ago. The kiddos love the song but also go crazy for the accompanying dance. I really like this song because I get a chance to talk with students about “call and response” songs and have an easy activity to introduce some improvisation. There are tons of opportunities for variation and expansion with this song!

This song starts out with an easy little call and response verse where the leader (me) sings a phrase and kids sing back with a response. I only teach kids what they’re going to sing back in response (and don’t initially teach them the leader part). The only thing they need to learn in the verse is when to add in a quick little “Yes sir.”

I sing a phrase and they sing back “Yes sir.” I sing something else and they sing back, “yes, sir.” It’s easy for them to get the quick little “Yes sir” (or for a woman, “Yes, ma’am”) response learned. In fact, a lot of my kiddos already know how to do this “Yes, ma’am” response because they’ve sung something just like it with the song “John the Rabbit.” We try out a few examples and I sing the first few lines of the song with them, letting them respond back at the appropriate times. 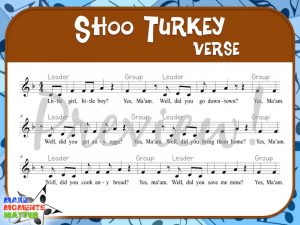 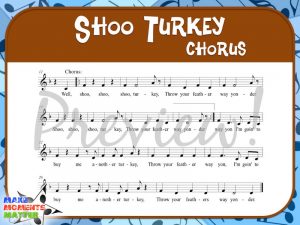 This music (along with a lot of other resources) is available in a “Favorite Folk Song” Teacher Kit. Check out everything that’s included at this link!

SHOO TURKEY! DANCING ALL OVER THE ROOM!

Once we have learned the music for the whole song I add in the movements! On the verses the kids stand in a scattered formation. This is a variation from what Bessie Jones tells us in her book, but I’ll explain why I do it this way in a moment. We are scattered throughout the room but kids turn to face me as we sing the call and response.

On the chorus, Bessie Jones says that the children turn and “dance through the yard, shooing the turkeys by waving their hands first to one side and then the other.” Students turn on each “shoo” and wave to the right and the left as they move through the yard to the beat of the song. Kids LOVE pretending that there are turkeys all around them that they have to shoo away. With some classes I’ll stop and ask why we might be shooing away turkeys around this time of year and they look around at my decorations and say “because Thanksgiving is coming and the turkeys might get eaten!” Super fun for kids and easy to learn the actions. It’s great if they can “shoo” to the beat, but it’s not imperative.

In the original version by Bessie Jones the kids stand in a long line (instead of scattered) and “snake-dance” through the room in a winding line. Kids follow one another in that line and shoo turkeys away to the beat. This didn’t work for me. Kids ran into one another and I had more arguments than singing. So, we switched from a line to a scattered formation and the problem was mostly solved. On the verse kids stop moving and turn to the leader to sing a call and response and on the chorus they move around in their scattered formation and shoo turkeys away. 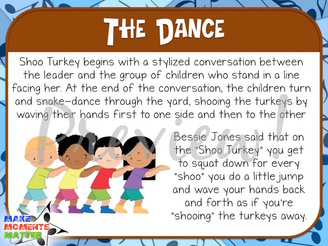 The dance can get more complicated if you want. In the “basic” version the kids just walk around shooing turkeys. Usually I use this less complicated version for younger grades. However, you can definitely change things up for older kids who can handle more complicated dances. Bessie Jones adds something in the chorus that she calls a “pretty little jump” where kids do a “chug in a squatting position; the arms are thrown out to right and left alternatively on each chug keeping time to the downbeats of the song.” Check out the YouTube video below to hear how this might play out. As I listen, I imagine a line of kids squatting down in a big line and can hear them chugging on the downbeats of the chorus.

When I added this squat and chug/jump in in a line formation the kids kept running into one another. Some of those collisions might have been intentional, but I suspect that asking them to do this complicated squat/jump/chug in a small space like the music room was just too difficult to do in close proximity to another person. Heck, it would be hard for me to control! So, we went from a line to scattered and had a much easier time.

“AND THEN WE…” OPTIONS FOR IMPROVISATION

I usually teach the song and dance on the first day and go through it several times. I use echo singing to teach the musical part, add in the dance/movement slowly, and build up to a full performance. If the kids can handle it I might even play the piano or grab a xylophone to add some accompanying music as they sing the whole way through. The next class period we make some changes. We will sing and run through the whole song once just to remember and get a feel for what happened before.

Once we’ve gone through it all at least once, I’ll begin to change things up. For instance, on the verses I’ll start to improvise lines that didn’t appear before. Instead of just singing the given lines that are in the original song I’ll ask kids other questions. “Did you go to the library? Yes, sir. Did you check out a book? Yes, sir. Did you pay your fines? Yes, sir. Did you say “thank you?” Yes, sir“ and so on.

We do that for a while and in between new improvised verses we’ll dance around and sing the “Shoo Turkey” chorus. We do this several times back and forth and I’ll give a variety of examples of questions that I could ask. Eventually we stop and talk about how I was adding new words that were improvised. We discuss how I came up with new words and the kids think about other things to ask and talk about in the song. Then I offer the chance to be “the leader” to kids in the class. They come up and get to sing a question to the class and the class responds with “Yes sir” or “Yes miss” depending on the kid. I might jump on the piano or recorder to provide some melodic support. I don’t teach the melody for the leader’s question, but after hearing it over and over most kids have it in their head without me taking the time to teach it. I give several different students the chance to sing the part of the leader and in between each kid we’ll sing the “Shoo Turkey” chorus again.

If we want to be really creative I might hand out ribbon wands to the kids to use on the chorus. That way when they “shoo” away the turkeys it gets really colorful and creative. The kids love any chance they get with the ribbon wands and so this adds another element of fun.

We might also take a second to talk about the two different sections of the song with the verse and chorus. We talk through about how their actions are different, their singing is different, the roles of the students are different, etc. We easily categorize the verses as the “A” section and the chorus as the “B” section. If I’m teaching this to a grade where we’re putting an emphasis on form I might point out the different parts are verse and chorus because the verse words can change and the chorus words always stay the same.

I hope you had fun reading about how I introduce and play around with this fun little folk song. There are endless opportunities for “what comes next” with this song.

If you liked the visuals and resources you saw in the above blog post then check out this Favorite Folk Song Set for the song Shoo Turkey. I have it available to download as a PowerPoint presentation and also as JPEG files. Included in the set are a lot more pages of historical context, vocabulary, background for the song, visuals, and aids for teaching. You can use the PowerPoint for visuals and explanation as you teach or you can post the images out in the hallway as a bulletin board that reinforces the content you teach in class (or you can do both)!

David Row’s classroom motto is “Sing, Learn, Laugh, Grow!” Take a peek into his classroom in Haslett, Michigan and you’ll see students doing each of those things every day as they sing songs, play instruments, compose music, improvise, dance, use critical thinking skills, and much more. It’s hard to find a moment when David is not involved with music making. He is active within the Orff Schulwerk community, presents workshops around the country, and offers music teaching tips and tricks on his blog. You can check in with David at his TpT store or connect with him on Pinterest, Facebook, Instagram, and Twitter.