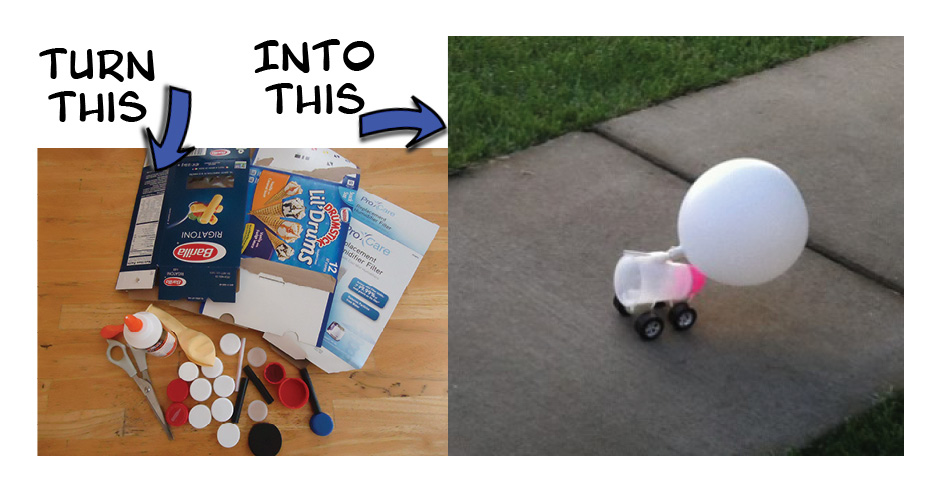 This post originally appeared on the blog The Curriculum Nerd.

I have a confession. I collect bottle caps. Small, large, from all sorts of bottles, everything from Gatorade to milk. In the summer, when my collection reaches mammoth proportions and I can be seen begging bottle caps off strangers and relatives alike, this obsession seems undecidedly bad. But in the winter, when the first race of the season is underway, and my collection has been put to good use, it’s easy to see this was never an obsession at all. Because in that moment it’s finally clear. I never saw bottle caps; I saw race cars!

There is growing research to support the use of hands-on, inquiry lessons in the science classroom (Kauble & Wise, 2015). In fact, the Next Generation Science Standards (NGSS) adapted by most states puts a great deal of focus and emphasis on collaboration and student-led discovery. But how does all this research and theory translate to the day-to-day workings of the classroom?

When I first started building race cars with my 8th grade students, pre-NGSS, I used it as a culminating activity. It was an active, engaging way for students to summarize and evaluate 4 weeks’ worth of Newton’s Law knowledge about how things move on Earth. Powered by balloons, students had to engineer a car that could move fastest and furthest down the raceway. Each of Newton’s three laws must be put into action for students to experience success and though the task sounded easy to most students at the beginning, a lot of hard work and critical thinking is needed in the end. Race day was always a well-remembered highlight of the year and the students walked away with a much better understanding of motion after experiencing the hands-on engineering project.

But two years ago, when I started to evaluate my teaching in light of the new standards, I started to wonder… what if I didn’t teach Newton’s Laws? What if students built the cars first? Would they make connections and ask questions that would lead to a self-discovery of the laws of motions? Or would my classroom devolve into a not-so-glorious mess of recycled boxes, glue, and, yes, bottle caps? I decided to take my chances… we would build without knowledge of Newton or his laws.

When I first posed the question (Who can build the fastest race car made only from recycled materials and powered only by balloon?), there was a lot of excitement in the room. But after the first build session, excitement turned to frustration… quickly. A pack of frustrated middle schoolers can be a little scary, so it was important to channel this energy. Thus the debriefing, an important strategy I discovered as I was making my transition to student-led inquiry. I learned that it’s important to take time (10-15 minutes) to stop and generate questions when using this style of teaching. Why are you frustrated? (The wheels don’t turn; the car won’t move.) Responses from that first question turned into new questions. (Why don’t the wheels turn? Why is it important for the wheels to turn? (Newton’s Law #1!) How do wheels turn on actual cars?) And these questions became topics for research.

At this point, building stopped and research began but more importantly an atmospheric shift occurred in my classroom. Suddenly the classroom atmosphere had shifted from ‘I want my students to know why’ to ‘my students want to know why.’ There was deliberate purpose behind their search for knowledge. They had a mission to accomplish!

So, how did my quasi-experiment on the use of student-led science projects fare? Well, as I would tell my students, more data and research would be needed to fully gauge the impact of this method (they would roll their eyes too, don’t worry) but here is a bit of qualitative data I found… my students were far more engaged and present in the lessons. The truth is, there is still direct instruction needed here. The difference is instead of me saying “today we will learn about Newton’s second law of motion which involves the math formula force = mass x acceleration” (insert student yawn here) the students are asking “why does my car stop moving when I add decorations?” and I am responding with a lesson. Additionally, students are assigning themselves homework, a phenomenon I found hilarious! I am not a big advocate of homework and I don’t often assign it but in this situation, I found that most students would go home and do something related to their project. Whether it was asking someone for advice, taking to the internet, or reading a book, the majority of students were considering the science well outside of the classroom. And finally, the students were turning to each other for help and advice (collaboration anyone?). Discussions about why wheels that turn are better than wheels that don’t turn supported by information from Newton’s laws and a few tests we did on friction were happening all around me. It was enough to bring this curriculum nerd to tears.

So, the next time you see a bottle cap, or an old box, or even a scrap of paper, ask yourself what possibilities it might hold. What could a little science, a little engineering and lot of middle school creativity bring to life from that simple recyclable?

(A.K.A. Kara) resides in Northern California and has been an educator for 12 years.  When she isn’t nerding out on curriculum or science, she can be spotted reading a good book, spending time outside, or playing board games with her son. You can read about her many educational adventures and more on her blog The Curriculum Nerd plus follow her on twitter @curriculumnerd1 for updates.