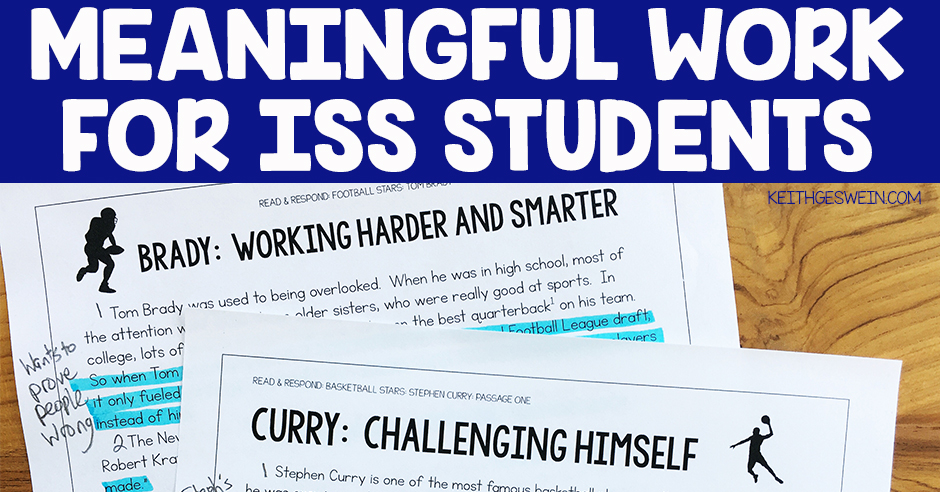 This post originally appeared on the blog Keith Geswein.

I always hate the assignments I send with students when they serve ISS. I hate everything about ISS. Obviously, when students are fighting or behaving extremely disrespectfully, they need to be removed from class. Once he/she is taken to ISS, I despise gathering work for the student to do all day because I know I’m going to do a terrible job of doing so.

I always end up feeling guilty for the work I send. I know I should have already prepared packets of work, but planning ahead is not exactly my strong suit. So I end up grabbing workbooks and textbooks. I spend about two minutes looking for things that will take this student a long time to complete. Then I slap a few post-it notes with pages numbers to complete. The entire time, I’m thinking, “This is such pointless work.”

These are the students who need the most support and I’m sending pointless work for them to do right after they’ve had a serious altercation with another student or teacher. I always feel guilty, but I feel like I have no options because I only have a few minutes to find work because I’m in the middle of class. The work also has to keep the student busy for a day without requiring too much effort from the ISS teacher who already has a million other things to do.

These are the students I’ve kept in mind as I’ve written over 200 passages about famous athletes. As I research athletes like Kevin Durant, Tom Brady, Cristiano Ronaldo, and Usain Bolt, I look for stories about times they’ve made mistakes and how they overcame them. When Kevin Durant was in high school, one of his basketball coaches was murdered. Kevin was really upset because this coach was like a father to him. Kevin’s performance on the court suffered because he started disrespecting opponents and hogging the ball. Then Kevin realized his old coach would not have wanted him to play like that. Kevin stopped doing those things and his play improved. The students who are sitting in ISS need to realize that huge celebrities like Kevin Durant make mistakes just like them. Our students need to read stories of successful people who learn from mistakes and are determined never to make the same mistake twice. Now, Kevin Durant is one of the most respected players in the NBA.

When I write these passages, I also include stories of how hard these athletes have worked to achieve success. I describe how these athletes have put in years and years of insanely hard work to be successful. When NFL quarterback Tom Brady was growing up, he hated that his sisters were better athletes than him. He was determined to do whatever it took to be the best athlete in his family. Now he is one of the greatest quarterbacks in American football history! Here are some passages where the headline shows you the focus of the passage. 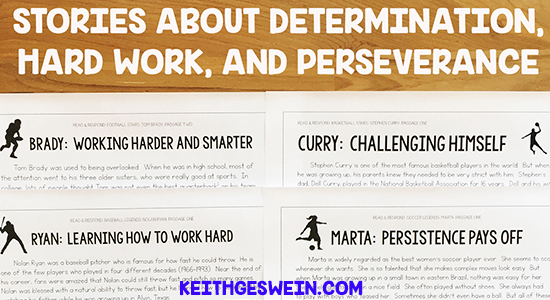 I’ve written three sets of passages about most athletes. For example, my set about LeBron James and Michael Jordan includes paired texts about their childhood, pro sports career, and charity work. 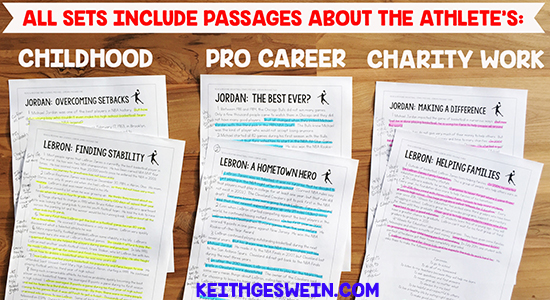 Each set of paired texts includes a quiz. There’s also a writing prompt that ties all the passages together. The first page, which you can give to the ISS teacher, explains which two passages go together. Answer keys are also provided. You can print a few copies of each set to have in a file folder for those times when you have to immediately send work for ISS. 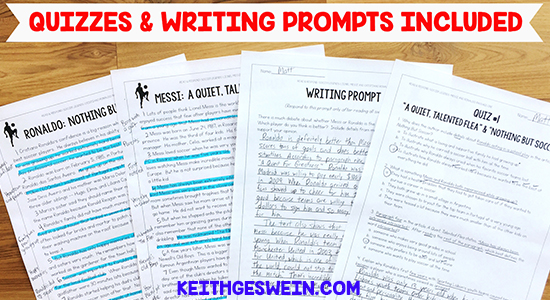 Some teachers have told me the work for ISS should be boring busy-work. I totally disagree with that! The punishment for the student should come in the form of isolation from his/her peers, not pointless assignments.

Click any of the images below to see all the paired texts I have available in my TpT store. I’ve written passages on more than 70 athletes who compete in a variety of sports, so I’m sure you’ll find topics that will interest your students. I also have passages written on a variety of reading levels to help you meet the needs of your students. 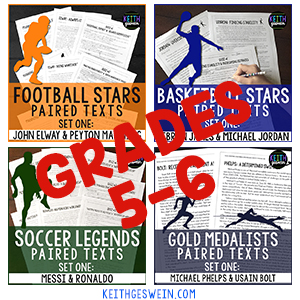 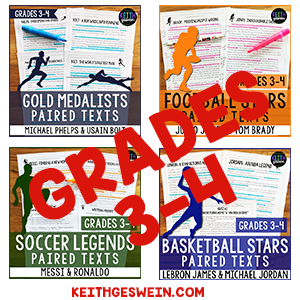 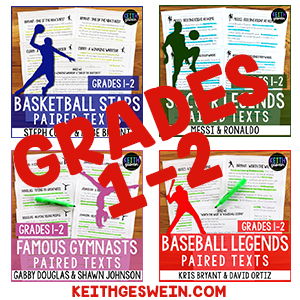 Feel free to email me at keithgeswein@keithgeswein.com to let me know how these work for you. Thank you for the 5,236,823 things you do for your students every day!

Keith taught 3rd grade and 5th grade for 14 years. He taught in Texas, China, and Florida. He loves designing resources that help teachers read quality literature with their students. He also loves when students get excited about reading. You can connect with Keith via his TpT store, which also includes novel studies for over 40 books. Connect with him as well on Facebook and Pinterest.