The Magic of the Good Table 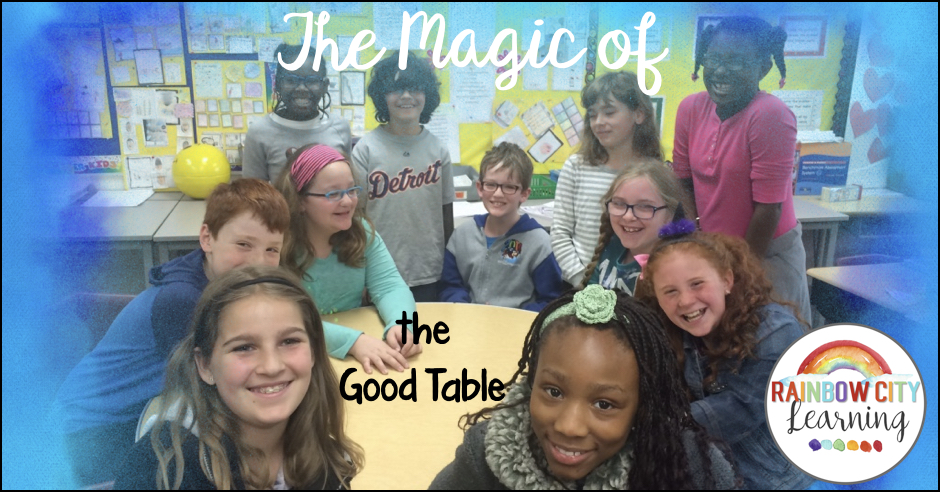 This post originally appeared on the blog Rainbow City Learning.

Another group of my fourth graders from the “good table” started high school this year. I’ve kept in touch with many of them and their parents, so my social media feeds have been filled with the beautiful photos of happy kids off to the next great adventure that life offers. It’s always hard to let them go. Year after year, I would watch them walk away in June, sobbing so hard that I couldn’t catch my breath. (I’m sure many of you know the feeling!) Wise words always followed from my friend Joannie, a more seasoned and reasonable teacher from my earlier teaching days. “Don’t cry. They’re making more. And when they’re ready, they’ll send them!” They always did. They kept on sending them. Most of them were even ready! But it somehow never made me miss the ones who had left any less. I still miss them.

A few weeks ago, one special mom who has become a friend, posted a nursery school picture of her child with a few friends, and then some photos along the way of this group about to enter high school. It made me smile through the tears. I responded, “There are the kids from the good table. Still together! Love it!” Immediately, other moms chimed in with questions about the good table. Were their kids seated at the good table in fourth grade? What is the good table? Is that even a thing?

Yes, friends, the good table is definitely a thing. It’s real and it’s alive in your classroom even if it is still unnamed. What is the good table? Simply put, it’s where the “good” kids sit. It’s the table that the teacher smiles at a lot. It’s a table where happy and smiling kids are always (Well – almost always. They’re kids!) on task. It’s your own little Lake Wobegone. (You may need to look this one up!) Kids at the good table feel super comfortable with each other and with you. They don’t mind taking risks with their learning and trying out new ideas. They know their friends at the good table will be cheering them on. They exude a confidence that apparently only sitting at the good table can offer!

Through the years, I noticed aspects of the good table showing up, but never really stopped to figure it out. You know how that goes – if things are running smoothly, you don’t usually question them. It’s when management careens out of control that it gets your attention and desire to analyze it! The year that the good table really made itself known was when this  year’s shiny new high school freshmen were in fourth grade.

I had always made it a practice to let kids choose their own seats and to stay there for the report card period unless there was an immediate and pressing need to change seats. We had arrived at the end of the first marking period, and I asked for all who wanted a change of seats to stand. My usual practice was that they would then stand behind the seat that they were hoping to move to. If the student in that seat also wanted to move, they would stand and move to another location. It always worked great. No pressure really. If the person in your desired seat didn’t stand, you would simply move on to another location. There were usually enough kids seeking a change that the system worked pretty smoothly. When all movement stopped, kids would go back to their former desks and get their supplies to complete the move.

This fourth grade year was different. I should have seen it coming, but it took me by surprise! When the seat-changing movement began, the group of kids at the “good table” formed what looked for all the world like a prayer circle. They held hands and squeezed their eyes shut tightly. They were still doing this when movement stopped. Some were even shaking a little. I didn’t count, but I’d say that 3/4 of the remaining students were gathered around the little prayer circle at the good table.

At the town meeting, it became clear that my students were seeing something very clearly in their own perception that I had failed to see at all. In their unanimous opinion, we had a very specific group of “good” kids in our class and it was their seating opportunity at the “good” table that made them that way. I asked for some clarification on why they thought that a particular furniture setting was such a desirable place to be. 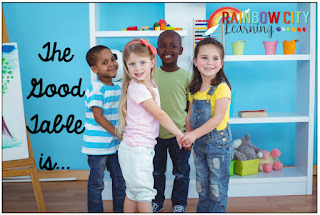 We talked a little longer, and came to a sort of agreement. We had a U shaped setup of desks arranged in three “tables”, giving us a large meeting space in the center of the room for town meetings and minilessons. I was willing to change that to make all of my students (all of whom I truly believed were the “good” kids) happy. I announced that everyone who wanted to sit at the good table could join it, and all who wanted to remain there also could remain. All agreed that was fair, so we went back to standing where we wished to sit. The “good table” became two full sides of the U, connected and flowing in an “L” formation. the few who really preferred to sit by themselves or in smaller groups were able to move their desks wherever they wished. The one rule agreed upon at our town meeting was that anyone who sat at the good table who interfered with the learning or well-being of anyone else would be invited by me to leave the table.

Within a week, everyone had discovered the secrets of the life-changing magic of the good table. 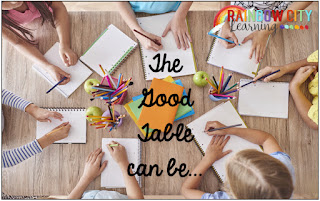 Changing desks was never much of an issue for the rest of that year. All three tables were the good table. Kids chose to move in and out of them for many reasons at the next two report card period changes. Each one of them took that good table magic with them wherever they went.

Wishing each of you a year filled with kids from the good table, and wishing my former students a high school experience filled with good table magic!

As you create a little good table magic of your own, you might find these resources helpful: 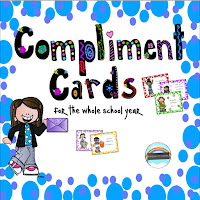 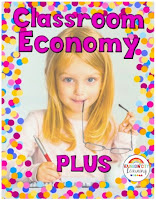 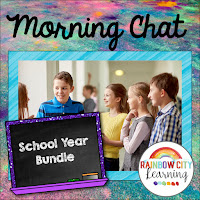 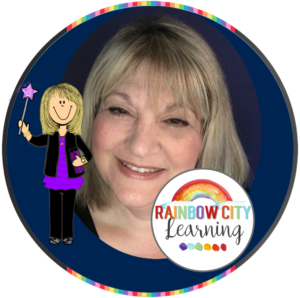 Retta London is an award-winning, now retired, Michigan teacher. Her blog and TpT shop are both named for Rainbow City, the classroom community she shared with her third, fourth, and fifth grade students for many magical years. Retta has been a frequent presenter at local, state, and national conferences, as well as a volunteer in her home district.