Important Indigenous Figures to Teach About in School 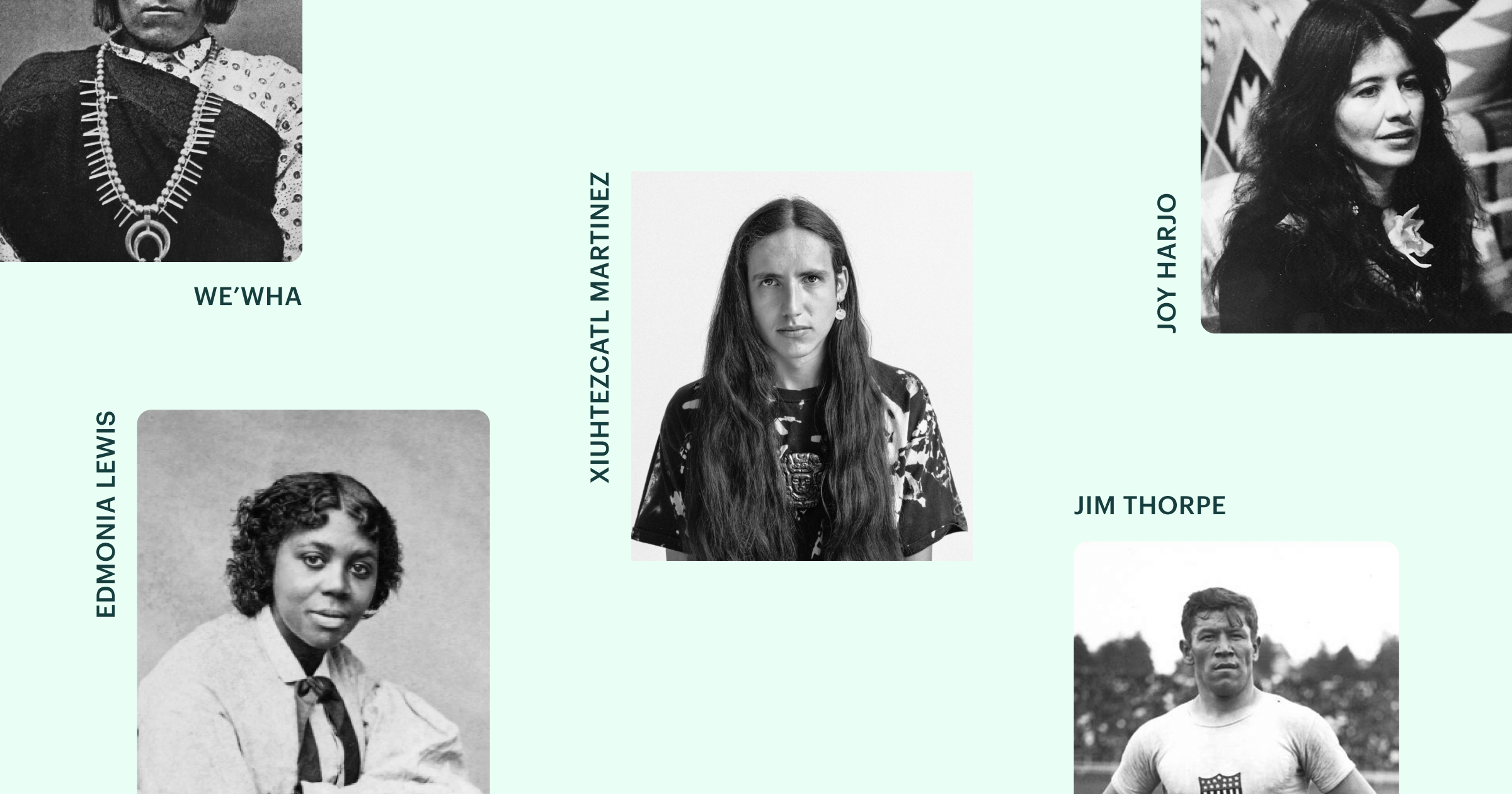 Throughout history and today, Indigenous peoples have left and continue to leave their mark across every aspect of society, from climate justice to the arts. While it is important to discuss Indigenous history and identity throughout the school year, there is a timely opportunity to recognize Indigenous peoples and their contributions during Indigenous Peoples’ Month in November. While this list is not comprehensive, here are 15 important Indigenous figures from past and present who you can teach about in your classes.

7 Historical Indigenous Figures and Their Impact

Oglala band of the Lakota division of the Sioux

Born in the Black Hills of South Dakota, Tasunke Witco, or Crazy Horse, was an Oglala Lakota warrior. He fought against encroachment by White American settlers on Indigenous territory and played a pivotal role in the Black Hills War, particularly in the Fetterman Fight and the Battle of the Little Bighorn. Today, this famous war leader is honored at the Crazy Horse Memorial in South Dakota.

The first African American and Indigenous sculptor to gain national and international recognition, Edmonia Lewis, also called Wildfire, was born to a Black father and a Chippewa (Ojibwa) mother. Lewis was orphaned at a young age and grew up among her mother’s tribe before attending college in Ohio and later establishing herself as an artist in Boston. In 1865, she moved to Rome, Italy where she created works depicting the struggles and traditions of both Black and Indigenous peoples.

We’wha was a Lhamana (Zuni Two Spirit) individual who became a Zuni cultural ambassador, a pottery and textile artist, and a spiritual leader. A skilled crafter, We’wha became one of the first Zunis to sell their ceramics and woven blankets, belts, and sashes, helping to promote Indigenous arts more widely. They participated in their community’s medicine society and the men’s kachina society, where they performed ritual masked dances. We’wha’s influence was recognized beyond their community, and in 1885, We’wha visited Washington D.C. for six months, even calling on President Grover Cleveland.

The first Indigenous woman to receive a medical degree in the United States, Susan La Flesche Picotte wanted to ensure that the Indigenous peoples on the Omaha Reservation had access to medical care. This became her life’s goal and work after watching an Indigenous woman die when a White doctor refused to care for her. Picotte not only achieved her goal, but she also went on to open a full hospital in the reservation town of Walthill, Nebraska. Today, the original hospital hosts a museum dedicated to her legacy.

Jim Thorpe was the first Native American to win a gold medal in the Olympics for the United States. He is often regarded as one of the most versatile athletes in modern sports history. In 1912, Thorpe won two Olympic gold medals: one in classic pentathlon and the other in decathlon. On top of that, Thorpe also played American football, professional baseball, and basketball, and was even inducted into the Pro Football Hall of Fame in 1963.

A respected Elder and champion of Alaskan Native rights, Katie John worked through proposals and court cases to restore her community’s fishing rights on their ancestral land along the Copper River, an area known as the Batzulnetas. The case became known throughout Alaska as the “Katie John case.” Katie also helped keep the Ahtna Athabascan language alive by creating its first written alphabet and making recordings to teach its pronunciation. In 2019, Alaska declared May 31, the day of Katie John’s death, as Katie John Day to celebrate her life’s work.

Chester Nez was the last surviving original Navajo code talker who served in the U.S. Marines during World War II. At the time, radios were not equipped with encryption technology, meaning enemy forces could overhear sensitive information. Nez and other Navajos helped prevent this from happening by communicating across radios in the Navajo language, which was difficult for others to learn and had no written form. Nez went on to write about the experience in his memoir and was one of five living code talkers to receive the Congressional Gold Medal from President George W. Bush in 2001.

8 Living Indigenous People and Leaders to Teach About

Onondaga and Seneca nations of the Iroquois Confederacy (the Haudenosaunee)

Oren Lyons is a Faithkeeper of the Turtle Clan, a member of the Onondaga Nation Council of Chiefs of the Six Nations of the Iroquois Confederacy, the co-founder of the Haudenosaunee Nationals lacrosse team, and a member of the Indigenous Peoples of the Human Rights Commission of the United Nations. In his work, Lyons advocates for environmental justice and treaty recognitions neglected by the U.S. government.

A poet, musician, playwright, and author, Joy Harjo is the 23rd U.S. Poet Laureate and the first Indigenous person to receive this honor. She has written nine books of poetry, two children’s books, two memoirs, and three plays, among other works. She has also released seven award-winning music albums and has taught at countless universities.

In 2002, former U.S. Naval aviator John Herrington became the first enrolled member of a Native American tribe to fly in space. The NASA astronaut carried the Chickasaw Nation flag on his 13-day trip in space after the flag was given to him by Chickasaw Nation Governor Bill Anoatubby. Harrington was awarded many medals and honors throughout his career, was inducted into the Chickasaw Hall of Fame, and eventually retired in 2005. He now serves as a motivational speaker to young people.

Born and raised in Oklahoma, Sterlin Harjo is an Indigenous filmmaker, director, and producer who has directed three feature films, a feature documentary, and the FX comedy series Reservation Dogs, which he co-wrote with the Māori filmmaker, actor, and comedian Taika Waititi. Harjo’s work is centered around the Indigenous experience and draws upon Indigenous traditions and practices of storytelling. Reservation Dogs is the first and only TV series where every writer, director, and series regular is Indigenous, and it most recently won a Peabody award.

Sharice Davids is the first openly LGBTQ+ Indigenous person elected to the U.S. Congress and one of the first two Native American women elected to Congress, along with Deb Haaland of New Mexico. First elected in 2018, she is currently serving Kansas’ Third Congressional District in Congress after working in economic and community development on reservations and in the Department of Transportation under President Barack Obama and President Donald Trump.

Cheyenne and Arapaho Tribes of Oklahoma

A graduate of the MFA program at the Institute of American Indian Arts, Tommy Orange is the author of the novel There There. Published in 2018, the book follows a group of Indigenous people living in Oakland, California and addresses Indigenous history and identity as well as the experience of Indigenous peoples living in urban places. Orange won the John Leonard Prize, the PEN/Hemingway Award, and American Book Award for his work.

Xiuhtezcatl Martinez is an environmental activist and hip-hop artist who served as the Youth Director of Earth Guardians. He was named one of DoSomething’s 2019 Youth Empower Players and has been speaking out for the climate justice movement since he was 6 years old. He has spoken in English, Spanish, and Nahuatl at the UN and has also advocated for climate change reform through lawsuits.

An Indigenous land protector and climate justice activist, Quannah Chasinghorse was part of Teen Vogue’s 2020 list of “21 under 21.” She is passionate about Indigenous sovereignty and the movement MMIWG2S, which stands for Missing and Murdered Indigenous Women, Girls and Two-Spirit People. She works as a professional fashion model and unapologetically shows her facial tattoos, a traditional hand-poke tattoo called Yidįįłtoo. Chasinghorse bridged traditional Indigenous adornments and contemporary elements in her viral 2022 Met Gala look and, shortly after, walked in New York Fashion Week for the first time.

For classroom resources for teaching about Indigenous peoples and their contributions, head over to TPT to find what you need.

And for tips on how to teach about Indigenous peoples and cultures, read what these Indigenous Teacher-Authors have to say: