How to Change the Thanksgiving Narrative in Your Classroom 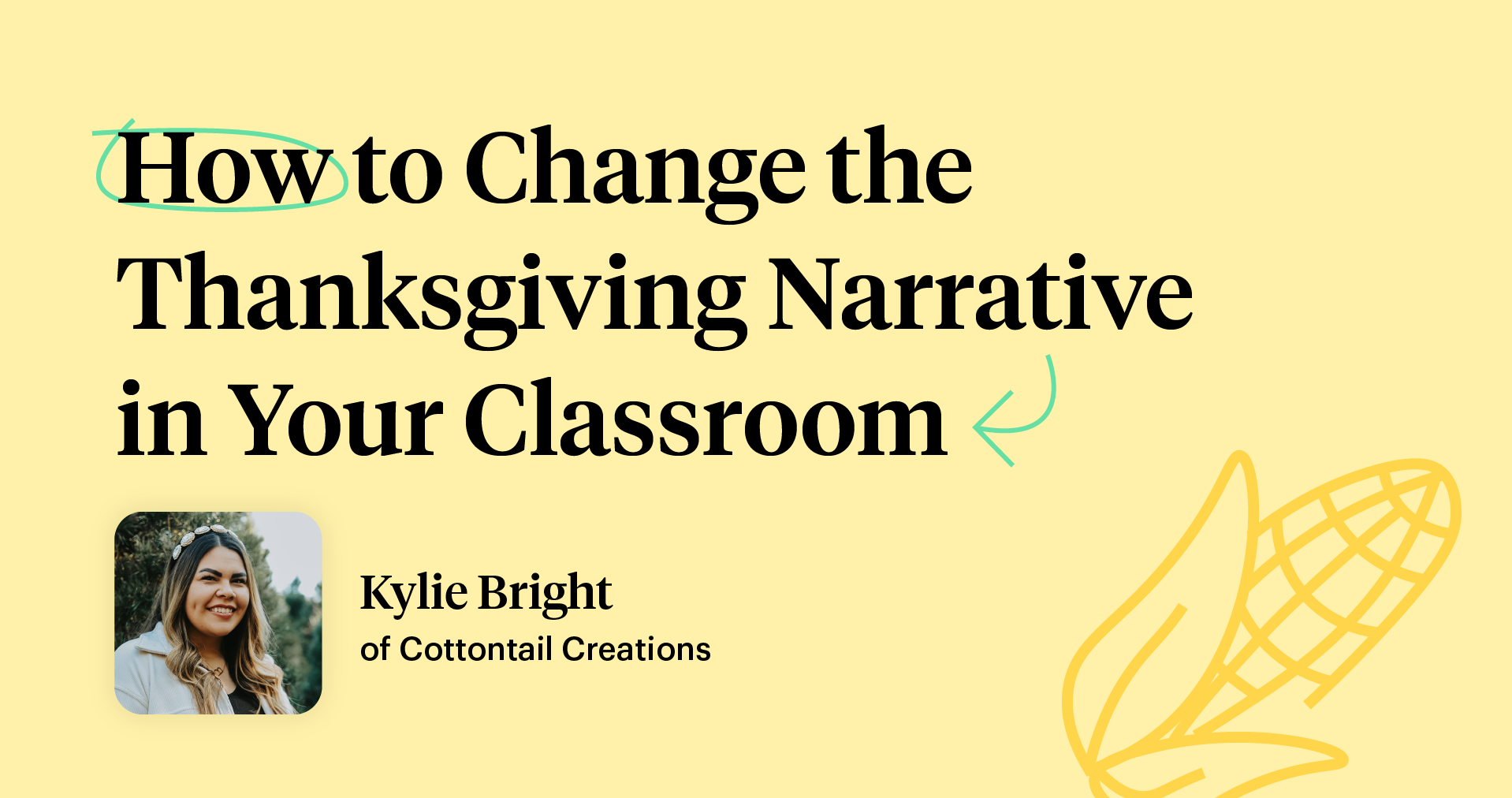 This post is an op-ed from Kylie of Cottontail Creations.

It’s never too early to start teaching the correct terminology. When teaching the first Thanksgiving, be mindful of the terms being used. Children of this age might not grasp all the words or ideas, but exposure now will be key in their later development. At this age, children may not understand the full story, but they will understand the food! Highlighting the food that was served at the first Thanksgiving will surprise your students and maybe even you. No potatoes, pies, or turkeys? That’s right! A great age-appropriate activity would be to make a venn diagram with your students. On one side, have them tell you all the food they eat at Thanksgiving. As you learn about different food that was present at the first Thanksgiving, you can fill in the other side. Then compare the two, what is the same and what is different? Another story you can teach is “The Three Sisters.” This tells the story about a primary food source for many Indigenous people.

Just like with the younger grades, working on terminology is very important. At this age, it will be important to explain how the Thanksgiving story includes the Wampanoags, but that there are many Indigenous nations all over the United States. Focusing on Indigenous culture, including where they lived and what makes the different tribes unique, can broaden what children know about Native Americans. As we know, the land that the English and other countries came to settle was not empty. By the time the Separatists arrived, more areas were empty because of the mass deaths of Indigenous Peoples that had taken place in the years leading up to their arrival. With your class, you can make a map that highlights the Indigenous nations in your area and around the United States.

One of the biggest misconceptions that’s been told is that all the Native Americans died out and are no longer around. However, this is far from the truth. Indigenous nations and cultures are resilient despite the many struggles they still face today. For this age range, talking about current Indigenous leaders and their contributions to their tribes and the world can help them gain understanding and contrast the myths they may have learned before.

One of the key events that led to the Thanksgiving story is the treaty between the Wampanoag and the English. Both parties knew they needed an ally. The English needed help surviving in their new land, and the Wampanoag needed peace after losing so many members of their tribe. The Pilgrim-Wampanoag Peace Treaty, as it is called, was signed in 1621, just months before the first Thanksgiving took place. For high school-aged students they can investigate treaties between Native American tribes and the settlers, starting with the Separatists to the present day.

This year marks 400 years since the first Thanksgiving. In the time since then, education around this moment in history has been based on misinformation and misrepresentation about the Wampanoag and other Native Nations. To make sure you can teach Thanksgiving in an accurate way, you must first know the real Thanksgiving story. Make sure when you research you are finding articles that are current, as many myths have been disproven in the last few years. A few great articles to start with are:

These articles  — and many others — will quickly show you the myths that are taught about Thanksgiving and how to combat them. These myths have manifested themselves into inaccurate stories and activities that have been taught as truth. Doing your own research and acknowledging your biases and misconceptions about the first Thanksgiving is the first thing you should do before you can teach your students an accurate narrative.

2. Approach Thanksgiving in an Intentional Way

3. Recognize Many Indigenous People Do Not Celebrate Thanksgiving

Before you go to your class with Thanksgiving lessons, you should first check in with Indigenous families in your classroom. To some, Thanksgiving is a reminder of the Indigenous lives that have been lost. In recognition of this, the United American Indians of New England holds a National Day of Mourning every year on Thanksgiving Day. There are also many Indigenous people who do celebrate Thanksgiving. Many take this time off to gather with family, celebrate our survival, traditions, and to honor those who fought against assimilation.

You can also check with local nations to get tips on how they view Thanksgiving and how you can talk about it in your classroom. To find your local nation you can use this map by Native Land. It will show you whose land you’re on and you can click on each Nation to find more information including their website. Almost all Nations have websites that will give you more information including how to contact them. Native Land also has an app and a teacher’s guide that has detailed instructions.

4. Replace Any Lessons or Activities that Are Culturally Inappropriate

If you have any lessons or activities you’ve done in the past that are not accurate, it’s time to replace them. Once we know better, we have to do better! Besides replacing the activities in your classroom, you should speak up if you see other teachers inaccurately portraying Indigenous history and culture. Many times in the classroom Thanksgiving is seen as the Pilgrims inviting the Native Americans to dinner. We know this is not true. We also commonly see Native Americans represented wearing headdresses which were not commonly worn by the Wampanoag. Some school activities that are not appropriate include:

What we know about the real Thanksgiving has changed dramatically in recent years. In schools, Thanksgiving and the Wampanoag are usually taught inaccurately. As you implement Thanksgiving activities into your classroom this year, remember these three key takeaways.

About Kylie from Cottontail Creations

​​Kylie is an Indigenous (Choctaw) educator from Oklahoma. The majority of Kylie’s family has worked in education. Growing up around wonderful educators, she saw the impact they made on their students and schools, and she knew she wanted to do the same when she grew up. She is passionate about finding ways to make sure all students feel represented in their classrooms. Kylie teaches 5th grade and is currently in her third year of teaching. She’s also pursuing a Master’s in Early Childhood Education.