How to Help Your Muslim Students in the School Cafeteria 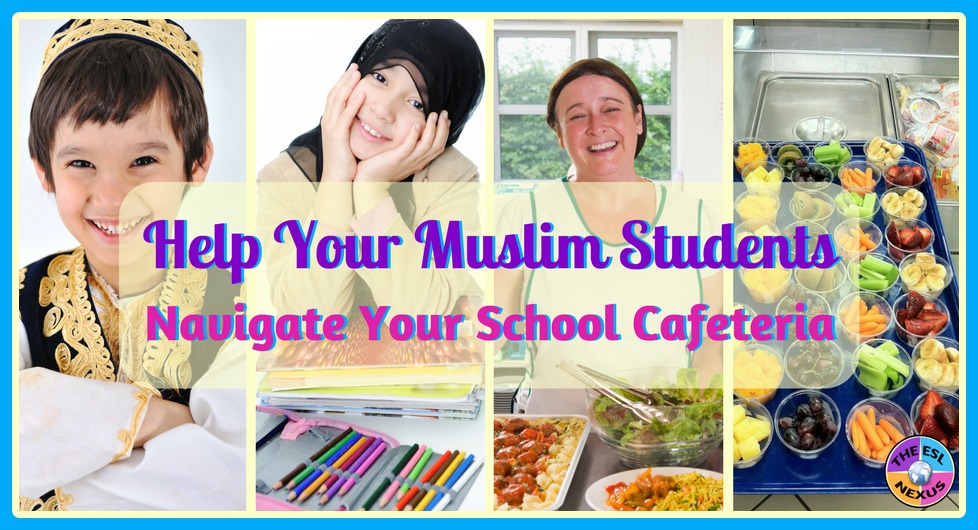 “My family moved from California to New Jersey in the beginning
of my sophomore year of high school. I will never forget the first day
in a new school, walking into the cafeteria during lunch and not
knowing a single soul. I didn’t feel confident enough
to share a seat at just anyone’s table.”
— Camille Guaty
Just as English Language Learners in general don’t fit into one neat package, ELLs who are Muslim come from a variety of cultural and religious backgrounds. Most Muslim boys and girls dress the same as typical American students, although some Muslim girls may wear a hijab (headscarf), and it is only through their religion that differences become apparent. Two Turkish 8th grade boys that I had my first year observed Ramadan but were not otherwise especially religious. Two elementary Kurdish siblings I had some years later, though, were. Neither they nor their parents spoke any English when they arrived at my school but through an interpreter who became a tutor for the kids, I learned that the parents had concerns about the children eating lunch at school — they needed to be sure that all the food their kids ate was halal.

More and more ELLs who are Muslim are registering for school in communities where people may not know a lot about Islam. If the school staff is not familiar with Islamic dietary regulations, problems may arise due to language and cultural misunderstandings. I hope this blog post gives you some suggestions for dealing with this issue if you work with Muslim ELLs who have recently arrived in this country and know little, if any, English.

The word halal means permissible in Arabic. Halal food is similar to kosher food in the Jewish tradition, in that it tells you what you can and cannot eat. You may already know that it is forbidden for Muslims to eat pork or drink alcohol. It’s also forbidden to eat dogs, snakes, frogs, and several other animals. In addition, animals whose meat will be consumed have to be killed according to Islamic law and only certain parts of the animal can be eaten. The Food and Agriculture Organization of the U.N. has a definition of what halal food is and you can read the specifics here. Food that is halal will say so on the packaging so it’s easy to tell if it’s permitted or not.

I didn’t want the Kurdish family to spend their limited funds on food when the kids could eat for free in the school cafeteria, since they were eligible for free breakfast and lunch. (Click on this link to find the USDA’s application forms for free and reduced meals in Arabic and 48 other languages.) But how would the students know what they could and could not eat? That’s where I came in. If you have Muslim ELLs at lower levels of language proficiency and who are unfamiliar with the food that is typically offered in school cafeterias, here’s an easy way to help them figure out what they can and cannot eat for breakfast and lunch at school.

The first thing I did was get a copy of the breakfast and lunch menus, which were distributed at the end of one month for the next month. Looking them over, I circled all the items that I knew my students could have, such as vegetables, fruit, pasta, and most desserts. For the items I wasn’t sure of, like hot dogs and pepperoni pizza, I went to the cafeteria and after explaining what I needed to know, the lunch ladies were very helpful. They pulled out several packages of food from cabinets and the refrigerator to look for the halal label. For the few items that we couldn’t find a label for, we called the director of food services and asked him. If he didn’t know whether or not a food was halal, I left the item uncircled.

During one of my planning periods before the new month began, I spent 5-10 minutes going through all the items offered on the breakfast and lunch menus. Sometimes I wasn’t sure about some things and had to go to the cafeteria to ask the lunch ladies. But that took only an extra 15 minutes or so.

Once I had the menus straightened out, I gave them to the older child; he was in 4th grade and his sister was in kindergarten. I explained that the circles meant Yes, it was okay to eat it and everything else meant No, it wasn’t okay. That was easy for him to understand. I photocopied the menus and sent one set home with him and kept another set in my classroom for reference. When the tutor saw the children, she translated or explained what the foods were and reiterated which ones were halal and which weren’t. That way, the children knew what to get when they went to breakfast and lunch. (If a native-language tutor isn’t available, you can try Google Translate to search for the names of foods.)

If you can take your new ELLs to the school cafeteria and show them the procedure for getting their meals, that would be helpful because it’s very likely the whole experience will be unfamiliar to them. Everything was new for my 4th grader and, fortunately, I was able to go with him the first few times to make sure he got the right things to eat. As we went through the lunch line together, with him pointing to the items he wanted, I explained to the lunch ladies that the boy was a new student who didn’t know English and I asked them to please be understanding and patient when interacting with him, and of course they were. (Since I wasn’t free at the kindergartner’s lunch time, I asked her homeroom teacher to help her.)

The other major food issue for Muslim students is what to do during Ramadan. (For info about this holiday, please click here to see my Ramadan resource that includes a reading passage, task cards, puzzles, and multilingual posters.) Having worked in Muslim countries, I thought it would be difficult for my students to go to the cafeteria at lunchtime and watch their classmates eat while they just sat there. So I talked to the principal, explained what I wanted to do and why, and arranged for the 8th graders to go to my classroom and spend their 15-minute lunch period there. (The Kurdish kids had moved by the time Ramadan began.) Another possibility, if it can be arranged, is for students to go to the school library. As it turned out, my ELLs actually didn’t mind staying in the caf so after a few days, they just went there and waited until lunch was over, then went outside for recess with their friends.

These are just a couple simple suggestions for helping your newly-arrived Muslim students with limited English language skills navigate the school cafeteria. They are quick and easy to implement and they will go a long way towards meeting the needs of your ELLs. How have you helped your Muslim ELLs adjust to their new school? 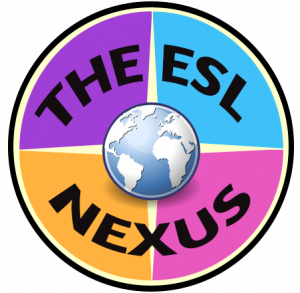 Susan has worked and traveled in the Muslim-majority countries of Sierra Leone, Mali, Indonesia, and Turkey and visited India on a study-tour for teachers as well. She has 25 years experience as an ESL/EFL teacher and trainer, most recently in Massachusetts where she taught English Language Learners in Grades K – 8 for 16 years. Now living in Arizona, Susan specializes in creating low-prep, engaging resources that develop the academic and language skills of ELLs in Mainstream and ESL classes. In her free time, she enjoys taking photographs of the Southwest and recently rediscovered the joys of playing table tennis. You can follow Susan at her TpT store and also find her on Pinterest, Facebook, and Twitter, where she co-hosts the monthly #ELLEdTech chat.