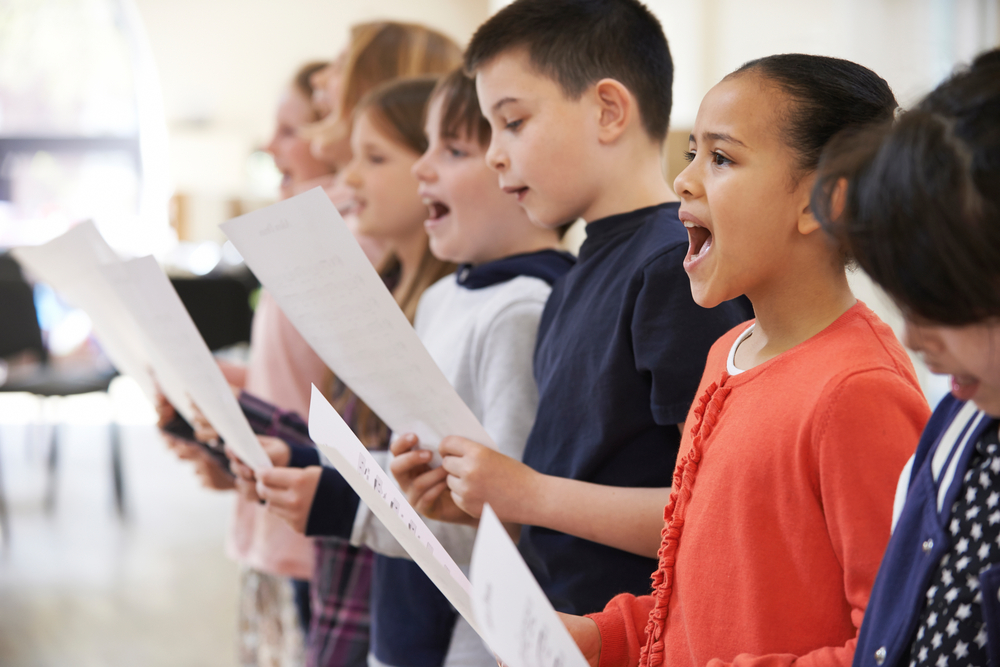 According to the National Association for Music Education, music appreciation increases imagination and intellectual curiosity. That’s because kids use their whole brains while studying music. Reports also show students who’ve developed music appreciation tend to score higher on their SATs due to better memorization skills.
What’s not to love? See where you can incorporate a love of music in your classroom with this chorus of music teachers’ most out-of-the-box, innovative approaches to teaching music.

Getting to know you and some other fun tricks

Shelley from Pitch Publications understands that “teaching students to read solfege notes (Do, Re, Mi, etc.) can be very challenging. My students had no frame of reference for these ‘weird’ old Latin words the notes are named for. In addition, students are expected to learn hand signs (like sign language) as a kinesthetic representation of pitch. My first attempts at teaching solfege to my students failed. They were miserable and confused, and so was I.” 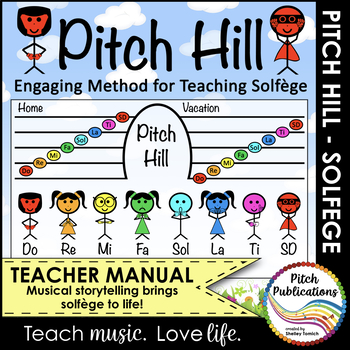 That is until she figured out how to make this task fun and accessible when by taking her kids to Pitch Hill. “One day I decided to turn the notes into characters and BAM! — Pitch Hill was born! Students were captivated by the stories of Fa, who hates green, and Re, who likes to climb up on the roof. The Pitch Hill stories provide a concrete reason for the hand signs as well help explain relationships between individual pitches.”

Dale Duncan AKA Music in the Middle with Mr D can relate. “When I first began teaching middle school choral music 26 years ago, it didn’t take me long to realize that I knew very little about how to actually generate excitement in my students when teaching them to learn to read music. They were miserable, and so was I.” 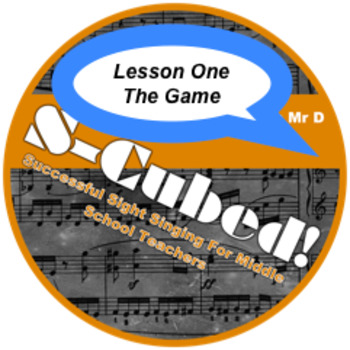 But Dale’s no quitter so he came up with a philosophy he calls “Forbidden Pattern” and his program called S-Cubed! Middle School Sight Singing Program for Beginners. “Their focus increased enormously. Their teamwork became exemplary.

The speed of the learning increased enormously. More boys began to join my chorus, and that is no easy task in middle school! The whole atmosphere of my classroom changed from drudgery and dread to fun and frolic. The kids looked forward to coming to chorus, and I couldn’t wait to teach them!” 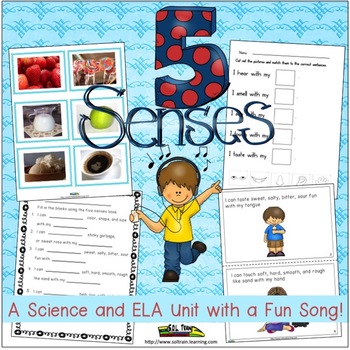 SOL Train Learning says, “The most progressive technique we offer is utilizing our musical learning approach in Science and Social Studies. We have a Five Senses bundle with a song that names the five senses, which body part goes with which sense, and what descriptor words are attached to each sense. Each of our songs is highly saturated with important information that’s sure to stick with your students. Using music in the classroom as a direct teaching tool has made a world of difference in the students’ comprehension.”

Whitney Mayo‘s technique: “I think one of the out-of-the-box things that I do with my kids is to really tell them like it is…. I tell my students that we are learning to read and sing real grown-up music, and their eyes light up with excitement! When they realize they are reading the same notes as adult professionals, it inspires them to continue. When we create music with the concepts we have learned, and the students hear their work come to life, it is simply incredible. My goal is to instill a lifelong love and appreciation for music, art, and all things beautiful.”

Be Playful and Incorporate Games!

Jennifer from The Yellow Brick Road suggests making your own Beat Buddies (an idea learned from Elementary Etudes) or Rhythm Monsters: “The puffballs serve as the beat, and the googly eyes are the number of sounds on the beat. I created only two types, just to give you an idea of what they look like. However, with the variety of sizes in the package, I could’ve easily made rhythm monsters that represented three or four sounds on a beat. I think this would be a great activity for rhythm review or as a craft for when there’s a substitute.” Read the full blog post here. 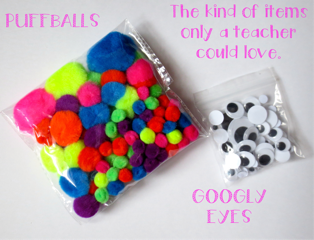 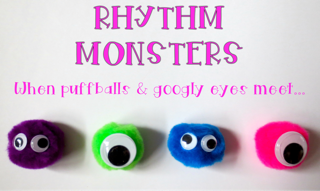 SillyOMusic answered our question, What’s your most out-of-the-box approach to teaching music?:

“After reading a few books and articles on children and the importance of play, I started including a musical games in many of my lessons. The kids have a laser-like focus whenever a game is introduced because they are interested in playing and competition. We all learn from what we are interested in. 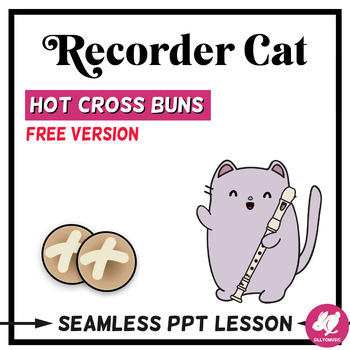 One winter, I watched students playing Four Corners almost every day for indoor recess. The game was simple but the kids never tired of it. It became clear to me that children will play just for the sake of playing, no prizes necessary. The rules didn’t even have to make sense. I then decided to transform Four Corners into Musical Four Corners. I loved watching students concentrate on rhythms and melodies without any prompting on my end, but it was even more rewarding to see the ones who were ‘out’ of the game continue to keep their eyes glued to the music until a winner was declared.

Musical Four Corners was such a hit, that I now take ALL of my learning objectives and teach them through games and fun movement activities (give her Recorder Cat Karate resource a try and see for yourself). It not only makes learning music more fun, but teaching it as well! Students are overwhelmingly more engaged and able to retain what they have learned. I see them playing the games at recess, and playing their recorders in the car line DAILY to show off what they had learned! It fills me with joy to see my students so interested in music theory and makes teaching it the more rewarding.”

says “The concept of a play party was new to me when I started delving into Kodály. Essentially, they are singing games that came out of finding a way around strict religious mandates on dancing. They were choreographed movements that took on the qualities of kids games because dance movements were banned.

The best part about a play party, is that your ‘I don’t dance’ kids still get up and move. Students at one of my schools had a history of not singing, not dancing, and not moving to music. But a more traditional middle school curriculum was exhausting for all of us since I only saw them once a week. This year, I’ve adapted a Kodály approach with them doing a mix of songs for older beginners, and ones with more difficult concepts. They have all been singing, dancing, and moving to music without thinking about it. And for the first time, concepts are coming much more easily to them. Most of the song choices I’ve made for them have fallen into the category of play party. Creating that comfortable environment has been more than half the battle, and now that it exists, we are getting ready to try our hand at dancing.” Read more in her blog post Incorporating Play Into the Music Room.

A Recipe for Success and Using Differentiation

Kim Maloney of Music Teacher Resources helps kids bring melodies to life with her resource MUSIC COMPOSITION: A Step by Step Approach for Young Musicians and says, “Initially students are afraid of attempting to write a melody — they doubt their own knowledge and abilities. Of course, the aim is that they are ALL successful on 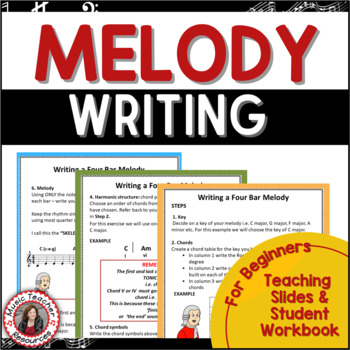 the FIRST attempt. The process I developed gives the students a wonderful sense of achievement and satisfaction in a short time period.

I give each student a booklet in which I have broken the process down into seven easy steps. I then demonstrate the process on the board while they follow along in their booklet. They then repeat the process by themselves… and voila — they have composed their very own tune!

As their teacher, it is the best feeling in the world to see how tall and proud they stand and how their chests puff out when they hear their tune played/performed.”

Floating Down the River- Linda Seamons has been teaching music for a long time but completed her three year Kodály certification after her youngest son, who is high functioning autistic, graduated from high school. She’s now in her fifth year of  teaching music at a Title One elementary school and says student tutors are the key to differentiating in the music classroom.

“At the beginning of 5th grade, I review the folk songs by singing them, doing the solfa hand signs (solfege), playing the associated song games, and reading the notes. This 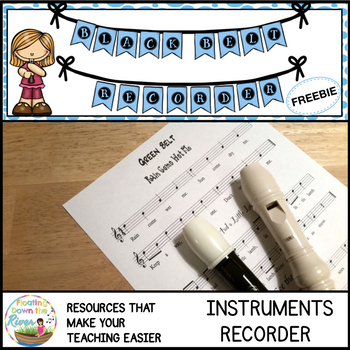 builds up a great desire in the students to start recorder, which starts at the beginning of the 2nd term, only after every student can read the notes for the black belt system.

I start the students as a group to get them all through the first three belts in the system. The most eager students come to school 15 minutes early to work on the recorder and pass off songs to me. Some students start earning their black belt in a matter of weeks and become tutors in order to help other students learn and pass off their songs.

For the past four years, every single 5th grader has earned their recorder black belt. They wanted to learn even more songs, so we now have 75 songs beyond the black belt.”

Try her Recorder Black Belt System Freebie and read her post Differentiating with Student Tutors In the Music Classroom for more info on how to implement this method into your own classroom!

As always, these TpT’ers are marching to the beat of their own drum and making music while they’re at it! Thank you music teachers for providing such great advice and wonderful resources.

Trending Tags
Middle School High School #BestResourceEver #BestClassroomEver Elementary Back-to-School
About TpT
TpT is an open marketplace where educators buy, sell, and share original teaching materials. Join our community of educators and share ideas, inspiration, and connect with teachers from around the world!
Shop on TpT