A Crazy Approach to Teen Writing 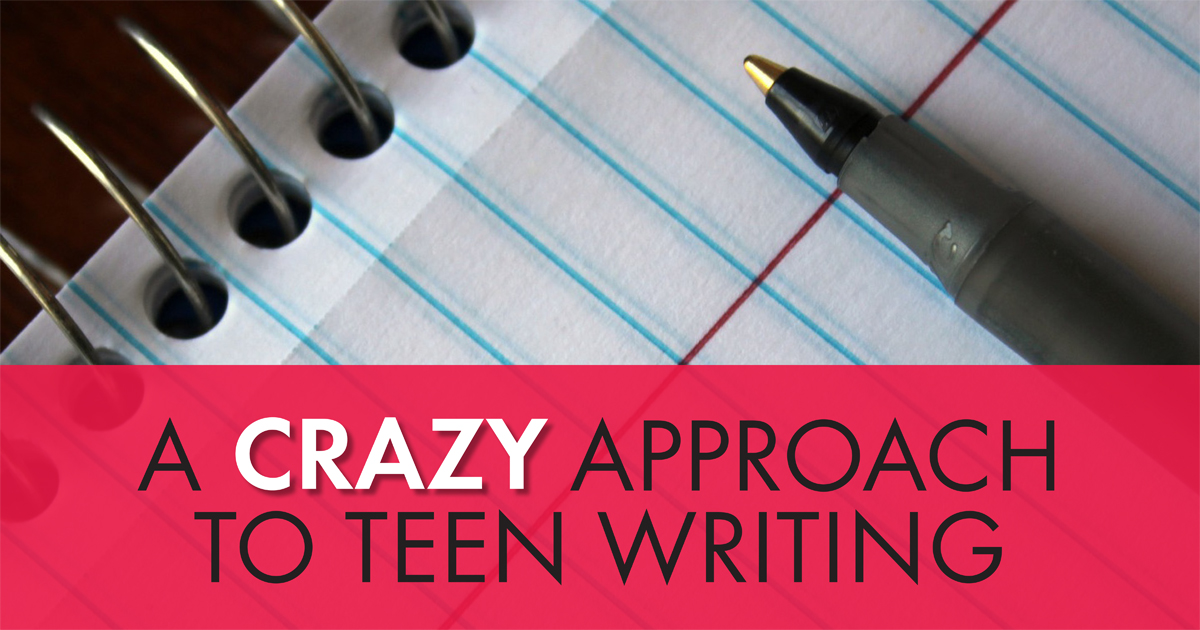 This post originally appeared on the blog Laura Randazzo – Solutions for the Secondary Classroom.

The only way I’ve found for students to really grow as writers is for them to write a lot and get meaningful feedback on their work. The reality, though, is there’s only one of me and 170+ of them, so my time with each student is limited. One way to maximize writing growth is a technique my students have dubbed, “Crazy Essay Week.”

Here’s how it works: In three days, students write three different in-class essays, which I collect at the end of each hour. On the fourth day, I randomly choose one of the three prompts and that’s the paper students clean up and turn in as their final draft. Basically, they write three and I grade one.

This routine started because of the pressure my juniors were facing out here in California with the required EAP essay at the end of the year. Students are given an agree/disagree topic and have 45 minutes to construct their response. To get them ready for this challenge, I decided to use a little academic strength training. On Monday, they might write about unhealthy competition among peers. On Tuesday, the prompt could deal with helicopter parents. On Wednesday, they’ll decide whether celebrity product endorsements should be banned. Then, on Thursday, it’s Topic Reveal Day, meaning I put all three topics into a sack and a brave student volunteer draws one to determine which topic’s first draft will be polished in class that day during a writers’ workshop session; the double-spaced handwritten final draft must be submitted to me by the end of the hour. On Friday, students collapse into their SSR books while I grade like a maniac. I finish the stack over the weekend and they get their scores and detailed feedback on Monday, the next class when I see them.

At first, students groan about the process. Teenagers who complain? What a surprise. In fact, each year at least one student has tried to switch out of my class when he/she realizes I’m going to fold in several Crazy Essay Week sessions throughout the year. (Thank you, counseling department, for always rejecting those requests.) But when paired with my codes and essay corrections, m-a-n-y students tell me at the end of the year that they appreciate the tangible growth in their writing skills and they feel completely prepared for their timed SAT and EAP essay exams.

A few things to keep in mind if you decide to give this a try:
• Students receive 10 completion points for each of the Monday through Wednesday first-draft essays. A completed essay earns full points. If a student doesn’t actually write an essay or tries to turn in just a few sentences, no points are given for that day’s effort AND the student gets the bonus of a visit from me during my prep period. I’ll go and pull that student out of, say, science class to chat about what happened on the previous day’s writing task and (um…lovingly) clarify my expectations for this next day’s effort.

• Make the final draft that you collect on Thursday worth the equivalent of a major essay score. You’ll get great buy-in because this essay counts, especially early in the semester when there aren’t as many points in the gradebook.

• Emphasize that this process is designed to help them. I use the analogy of being their coach – their writing coach. We’re doing the practice sessions (Monday through Wednesday) to get ready for the big game (Thursday). I also tell them that, like with weight training, there’s going to be some pain involved in this growth process.

• “Sell” it to them that Crazy Essay Week is great because there’s no homework during this week and they’ll be so much more prepared than their peers at other schools.

• I expect the first three days to be pin-drop silent as students write their first drafts, just as it would be in a testing environment. On Thursday, though, there’s a comfortable hum of activity during writers’ workshop, when students are allowed to ask me and their peers questions as they build their final drafts. Dictionaries are available, but no electronic helpers are allowed.

• During the writers’ workshop, I meet with lots of students as I circle the room, but I’ll answer only specific questions about specific passages, such as “Is this thesis clear?” or “Does a comma go here?” I won’t answer questions like, “Is this good?” or “Do you like this?” I also don’t read entire essays until they’ve been submitted for grading.

• I collect both the initial draft and the final draft at the end of class on Thursday. Students are welcome to change/add supporting details, but I expect the final draft to be clearly connected to what they wrote on the first day.

• Two nice benefits of using the lottery selection is that different periods will end up building final drafts on different topics. This means that I don’t get as fatigued with grading because the variety is refreshing and it means that afternoon classes can’t cheat by asking morning classes what topic will be chosen. It’s usually different for every period.

• Early in the year, I use the lottery approach on Topic Reveal Day. For our last session of the year, though, I usually let students individually choose whichever of the three they want to use as their final draft topic. I never tell them ahead of time about this free-choice option, though, because I want them to give a good effort on all three topics. (Shh…don’t let my future juniors know this little secret.)

• The other two essays that weren’t chosen for final draft revision are simply tossed into the recycling bin. Sometimes, kids want to keep them and you could add those unmarked drafts to students’ writing portfolios, but I just toss them after class ends on Thursday afternoon. Word of warning: Don’t pitch the stacks in front of students. It hurts their hearts more that you’d think.

When former students visit the campus during their winter holidays, I love to ask if our school prepared them well for their college courses. They always say yes and they’ll often add that Crazy Essay Week was the thing they remember most as helping to sharpen their writing skills. When they make that admission in front of a group of my current students, it’s just sunshine and lollipops.

Click here to grab nine different EAP-based prompts you could use with your classes, enough for three rounds of Crazy Essay Week.

Looking for another way to keep kids writing without getting buried in papers to grade? You need to check out these Survive! Writing Competition materials. Tons of feedback for students and NO GRADING FOR YOU. Really.

Laura Randazzo has been a high school ELA teacher for more than 17 years. She’s taught everything from the highest-achieving honors student to the continuation students. Laura’s wish: “What every student wants is to be inspired, to learn, and to have some fun while at school. I hope my passion for learning and for kids comes through in these materials.” Read more about Laura on her blog: Laura Randazzo – Solutions for the Secondary Classroom and follow her on her TpT store for more great high school ELA resources.