8 Ways to Get Your Students Hooked on Shakespeare

Shakespeare’s work is timeless. The rich language, engaging plot lines, and complex characters are enough to make an English teacher’s heart skip a beat. Unfortunately, sometimes that excitement doesn’t quite transfer to all of our students. Any teacher who has introduced a Shakespearean play will tell you that the moment they utter the Bard’s name, it is inevitably met with groans and grumbles.

Some may think this is reason enough to give up altogether, but Shakespeare’s work has so many benefits for today’s teen. His plays explore relevant universal themes like loyalty, ambition, jealousy, and betrayal. What teenager doesn’t deal with these issues at some point in their school career? Is reading Shakespeare a walk in the park? Of course not, but we need to make sure that our students know they can succeed in reading a Shakespearean drama if they are willing to approach it with a positive attitude. By taking on the challenge, students become critical and rigorous thinkers.

I’m on a mission to transfer my love for Shakespeare’s work to my students. I know that in order to do that successfully, I can’t simply pass out the play and start reading. Below are some tips and tricks to bring some Shakespeare love into your classroom. 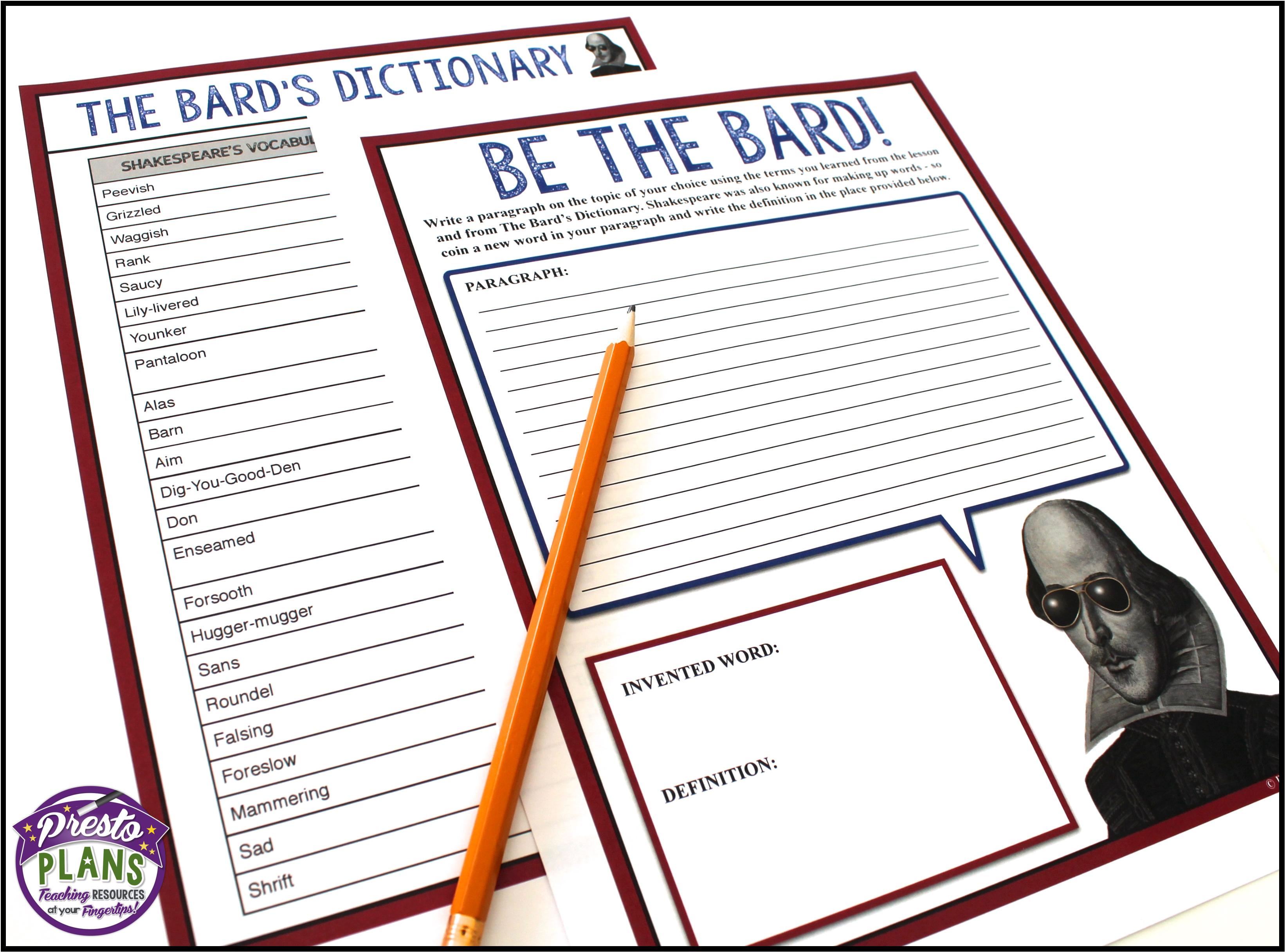 It is difficult to enjoy something that you don’t understand. Starting Shakespeare without some discussion about language is like throwing students in the deep end without a life preserver. I start any unit on Shakespeare with activities to familiarize them with common words used in all his plays. We do some fun translation activities where students change Elizabethan English into modern English and vice versa. After they’ve become more familiar with the language, they absolutely love the final “Be The Bard” activity where they write a paragraph about a topic of their choice using the Shakespeare Dictionary I provide.

Before starting any play, I also try to develop some context for Shakespeare’s life and times. I start by playing a fun Shakespeare trivia game, giving students a tour of The Globe Theatre, introducing them to life in the 16th Century, and assigning the class a Web Quest to learn about his life! 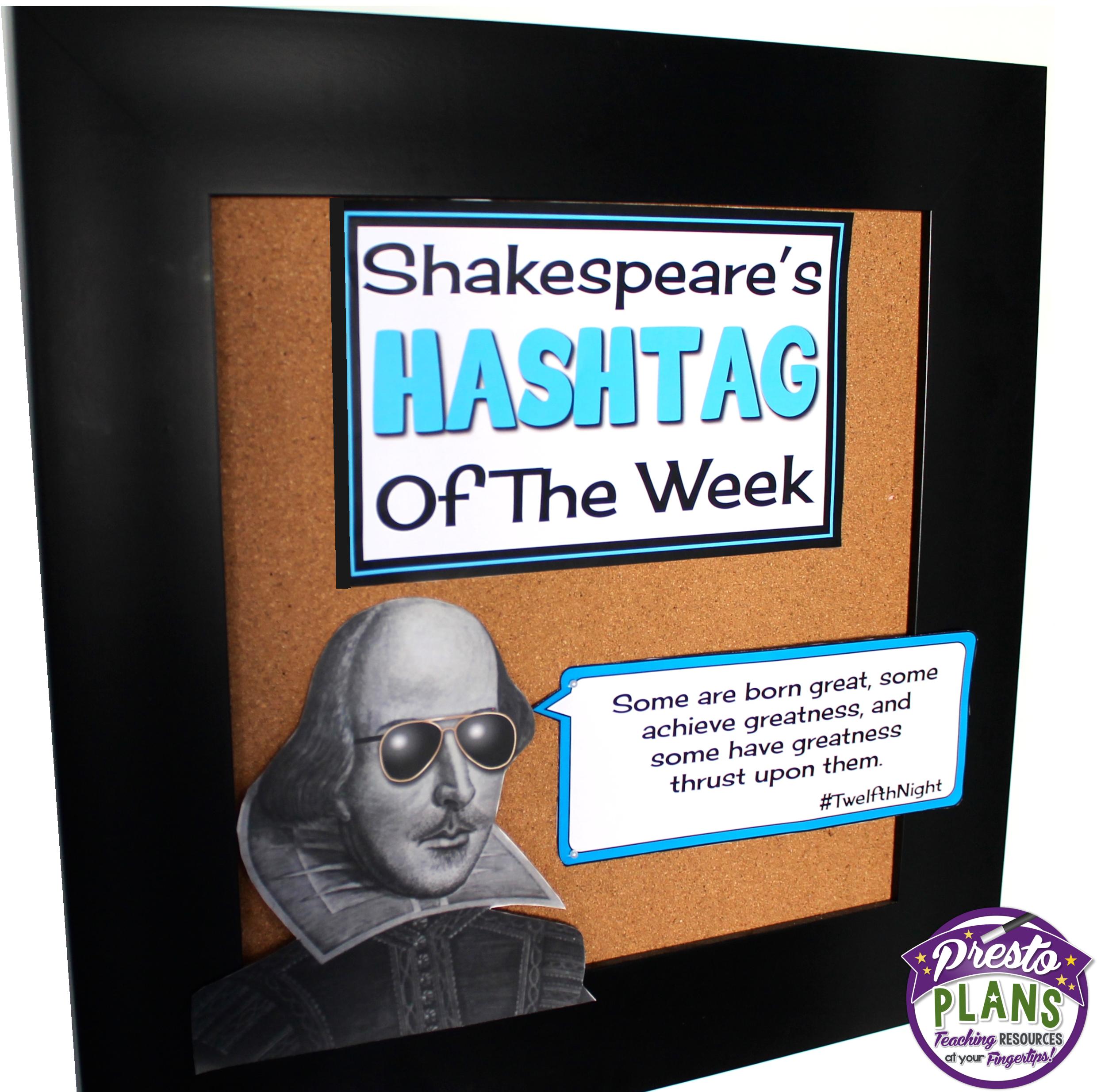 Find ways to make your classroom reflect a positive attitude towards Shakespeare. One of my students’ favorite classroom bulletin boards is my Shakespeare Hashtag Of The Week. The board displays quotes from Shakespeare’s plays that are still relevant today, and the hashtag tells the student which play the quote came from. I change it up weekly, and the students always take notice.

If you happen to be starting your unit in April, consider throwing a Shakespeare birthday party! Decorate your room and collaborate with the culinary teacher to have his or her class whip up some Shakespeare-inspired treats! 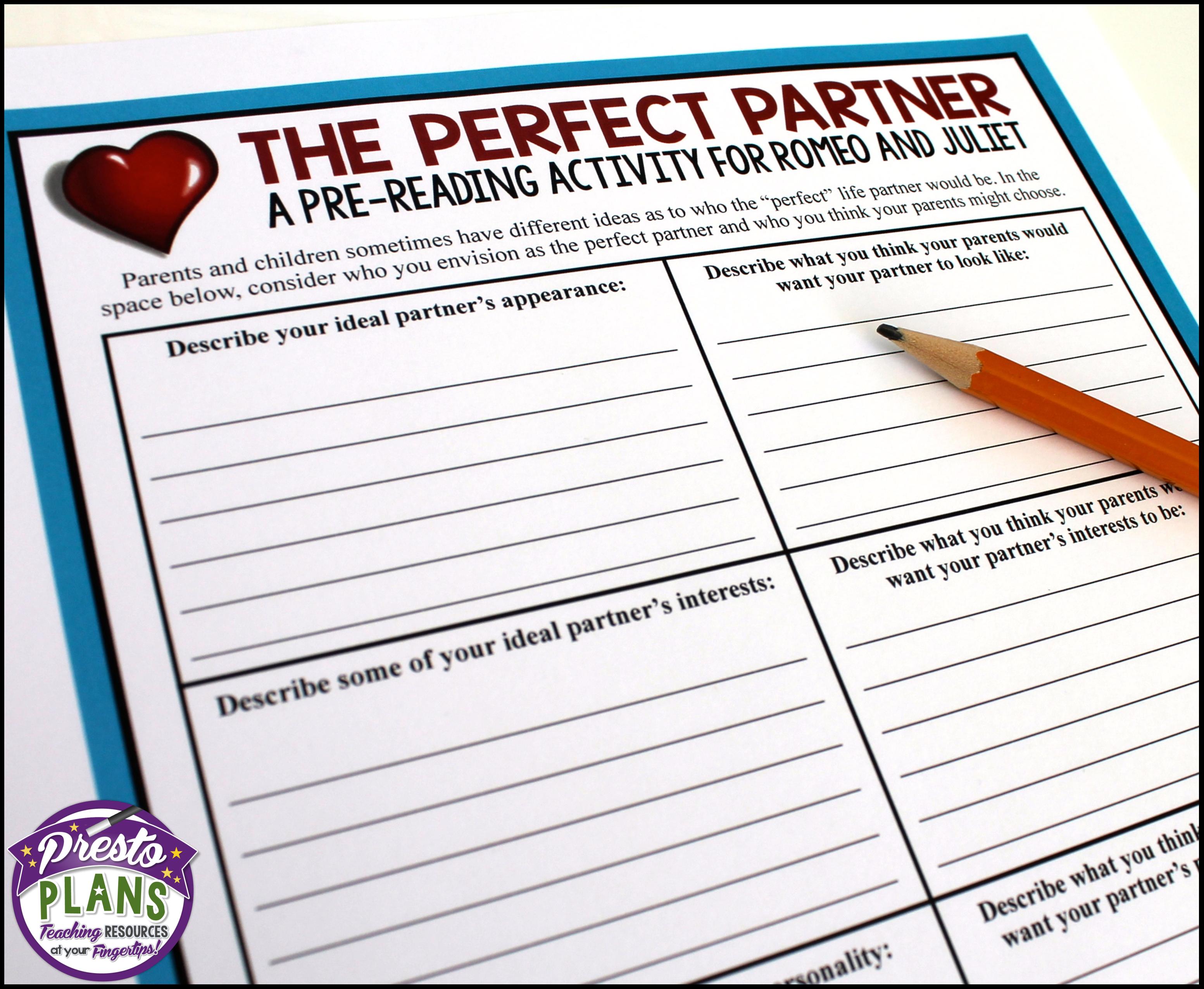 Shakespeare already has a bad reputation with students because the traditional way in which his plays are taught can be boring. If students lose interest quickly, the plays are bound to lose meaning. Teachers need to combat this problem by developing interest in the play before they even begin.

Begin by placing students into the situation and mindset of the character(s) using a more modern context. For example, if you’re starting Romeo and Juliet, you might have students envision their significant other and consider how their idea of a perfect match might differ from their parents’.

If you are starting Hamlet, try a four corners activity. Put signs in four corners of your classroom that read, “strongly agree,” “agree,” “disagree,” and “strongly disagree.” Ask students a variety of prompting questions related to the play, and have them move to the corner that matches their opinion. Then, have each corner share their discussion with the rest of the class. Include prompts like:

Handing students an entire play on the first day of the unit is a mistake. Instead, I like to start small by printing out the first couple pages using a larger sized typeface and bigger line spacing. This makes it less intimidating and easier to read.

Keep in mind that you also don’t have to read a play in its entirety. Choose the most exciting acts, and give students an overview of what they missed in the parts you skipped.

The best thing you can do for your students is model how YOU read/understand Shakespeare. Before you even begin your unit, show them a passage from any play and model the paraphrasing process.  Here are some of the steps I use with my students:

Define difficult words: Check the footnotes or dictionary for words you don’t understand.

Read footnotes/annotations: Read any annotations and footnotes that may help to clarify figurative language or allusions.

I imagine Shakespeare going all Titus Andronicus at the thought of teenagers idly sitting in desks reading his plays. His plays are meant to be performed. While you aren’t expected to facilitate a student performance of the play in its entirety, having students act out important or interesting scenes helps them connect with the play much more deeply.

Bringing performance into the classroom can be intimidating, so here are some suggestions to make for a smooth transition: 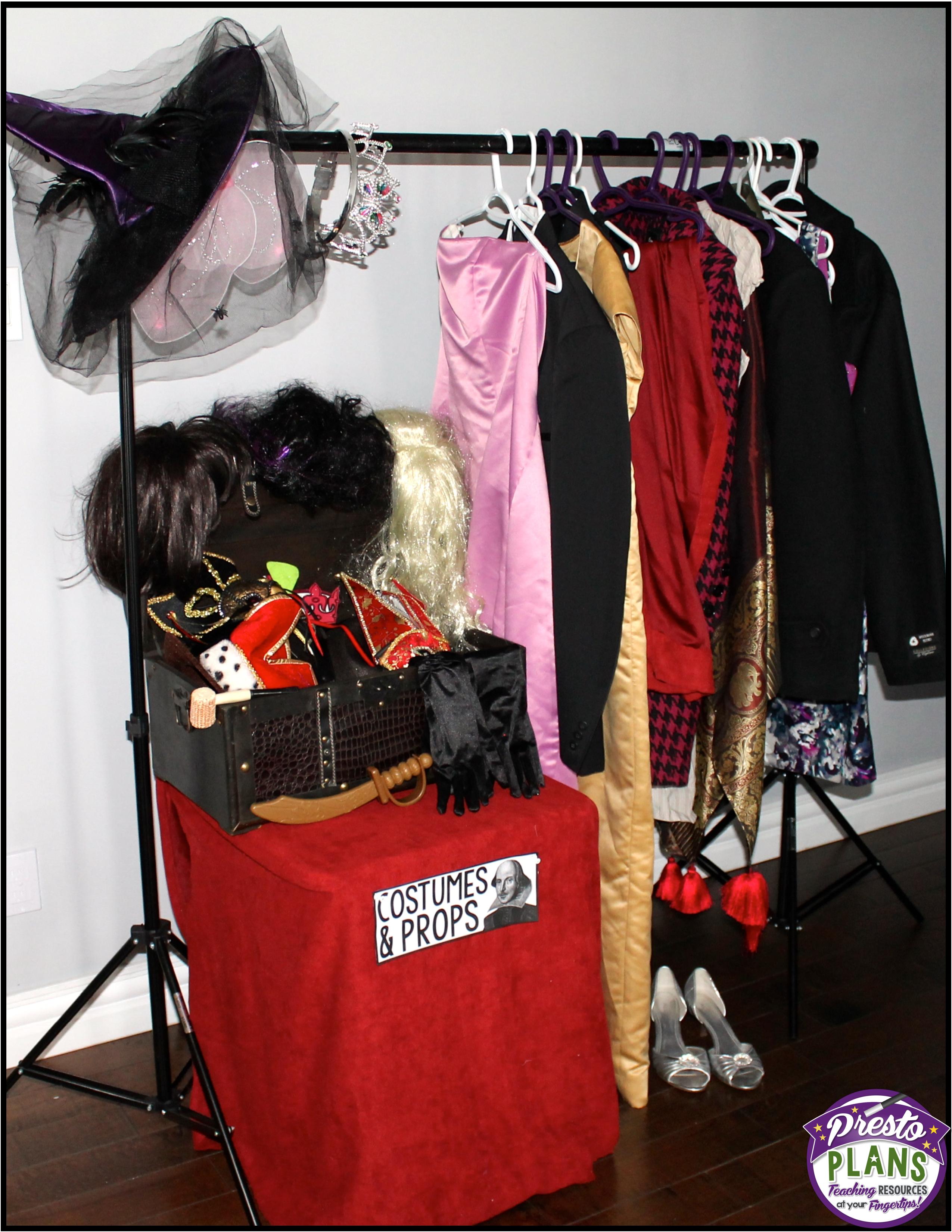 Performance starts with the teacher: Although it might be intimidating, try taking the risk of starting the unit by performing for your students. Dress up in a costume, memorize a small speech (or have it on a piece of paper), and hit the stage. Need a little support? Convince another teacher who is on prep during your class to join you in a dialogue scene.

Break out the costumes: Ask the drama teacher if you can borrow some costumes for your unit. It is amazing what a few hats, coats, dresses and props can do to the atmosphere in your classroom! Don’t have a costume room? Ask students to bring something in from home to make a costume pile.

Let students rehearse: Asking students to perform in front of their peers is stressful enough. Throw in an antiquated language, and you have a recipe for a panic attack. Remember that performance is meant to be fun! Make the process safe and comfortable by building confidence with a good amount of rehearsal time. What’s even better is that rehearsal allows for students to work with the text multiple times, giving them a better understanding of the plot.

Use a scaffold approach: Typically, students are given roles and the whole-class performance of a scene begins immediately. This can be very intimidating for students. Take the pressure off by using a scaffold approach to make the idea of performing in front of the class less daunting:

When you think it’s time for a whole-class performance, give some time for in-class rehearsal and assign the scene and roles the day before, so students have the evening to look over their part.

Be careful not to jump into analysis too early. Students need time to grapple with the text before discussing characterization, conflict, theme etc. The first read-through should solely be for understanding the plot. Once they have a strong understanding of the narrative, they will be more equipped to discuss and interpret the elements and structure of the play. 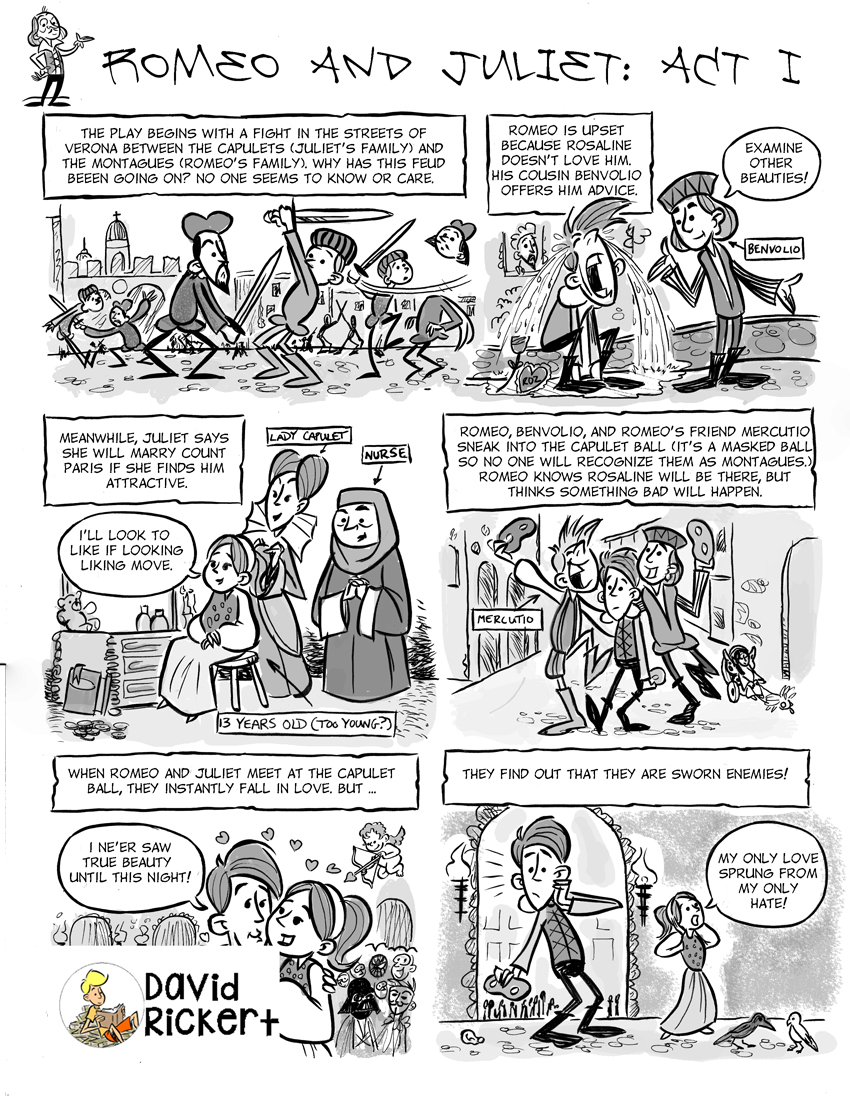 Personally, I don’t mind students reading a basic summary of the scene before they attempt the original text, especially the first few scenes as they are adjusting to the language. While this seems like “cheating” or a “spoiler,” having some context of who the characters are and what they are doing makes the process of understanding Elizabethan dialogue far less daunting. As students become more comfortable, have them read the original text first a few times, and refer to a summary after reading to make sure they are understanding correctly. As you approach the last half of the play, have students attempt to only read the original text for understanding (and you can provide support where needed).

Take this one step further by bringing some art into your Shakespeare unit. Use these eye-catching comics for Romeo and Juliet and Macbeth by David Rickert as a way of solidifying the plot for your students before they read each act.

Many teachers use the film versions of Shakespeare’s plays as an end of unit celebration. Try something different by using shorter film clips before or after you read/perform each scene or act. The shorter clips will more easily hold your students’ attention, and it will also give them a better understanding before they read or as they move onto the next scene/act. If you have the option, turn on the subtitles so your students get even more exposure to the language! 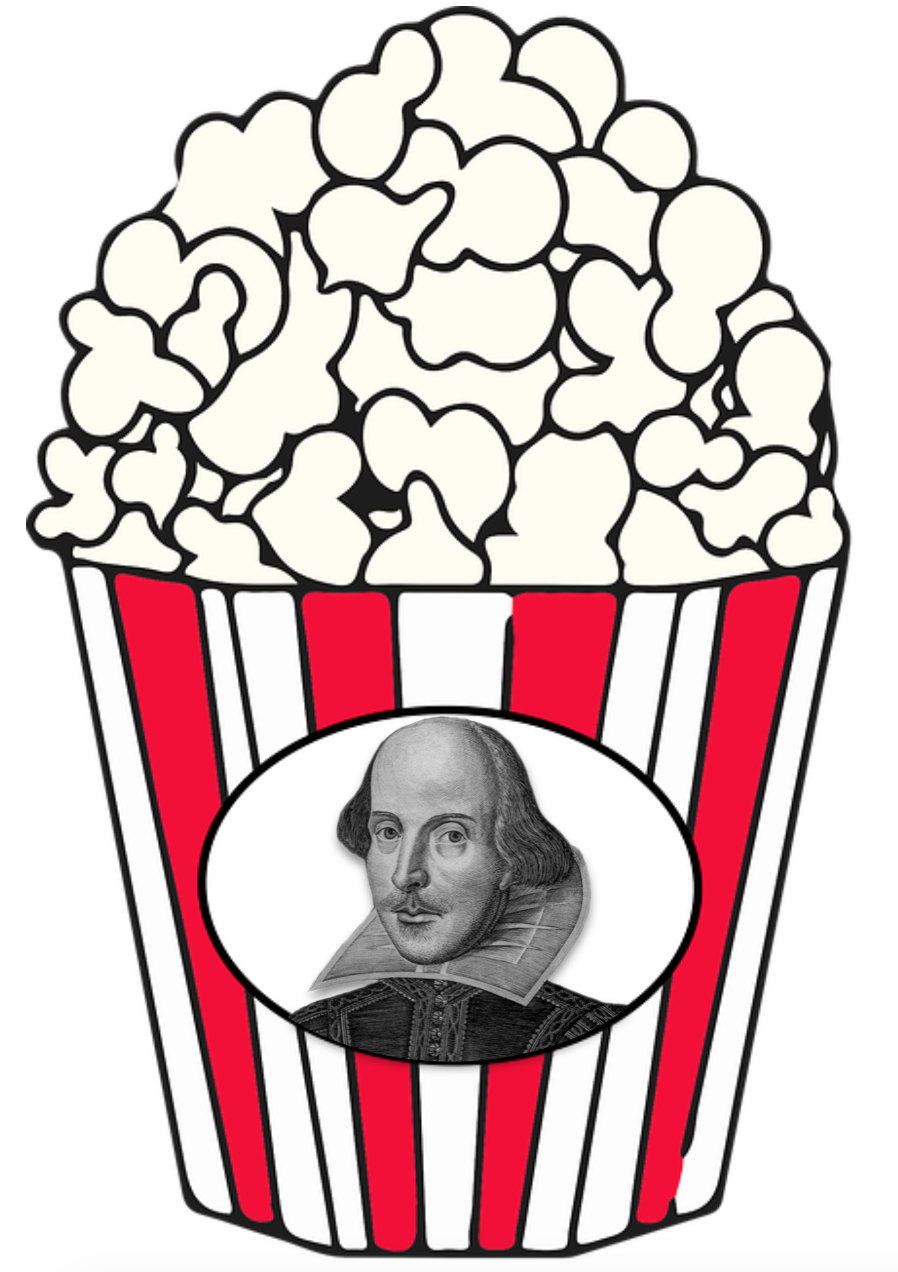 I would encourage you to also show a variety of clips from the original black and white films based on the plays all the way to the more modern films inspired by Shakespeare’s plot lines. Students love to see relevant clips from the following “teen approved” Shakespeare inspired films:

Romeo and Juliet: Shakespeare In Love and West Side Story

The Taming of the Shrew: 10 Things I Hate About You

A Midsummer Night’s Dream: Get Over It

The Bard’s work has enduring appeal and, by putting these tools in place to set your students up for success, they will be able to understand, interpret, and fall in love with Shakespeare!

Bonnie from Presto Plans is an English teacher who lives in New Brunswick, Canada with her husband and one-year -ld son. She is currently a full-time Teacher-Author, creating resources for the middle and high school English classroom.
Follow her Facebook page, blog, and TpT Store for English teaching ideas and resources.