8 Things You Need to Know When Teaching Culturally Diverse Students 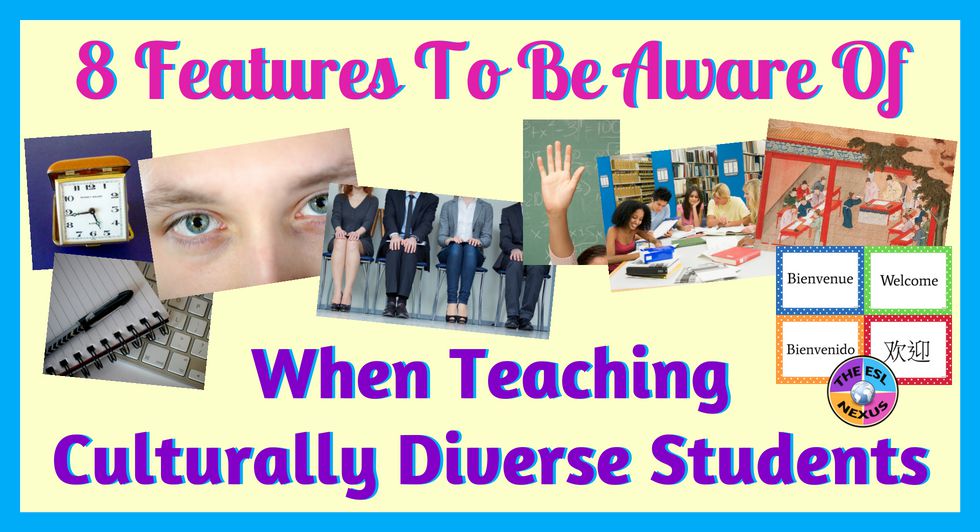 “Whether they hail from different cultures, countries or faiths, children are children.”
— Kimberly Quinn
English Language Learners are culturally as well as linguistically diverse. Understanding how cultural differences impact the conduct of your ELLs in your classroom will make you a more empathetic and effective teacher. In this blog post, I’m going to discuss 8 features that all teachers need to be aware of when teaching culturally diverse students. For tips about teaching linguistically diverse students, please read this blog post.

Concept of Time
Being on time is important in the U.S. but not as important in some other cultures, in particular Southern European, Middle Eastern, and Latin American countries. This is good to remember when making appointments with parents and guardians of ELLs. Family members might show up after the scheduled time and not think they’re late because they arrived within 10-15 minutes of the appointment. If that happens, you can politely explain that next time they should come as close to the actual time as possible, especially if you have a tight schedule, like for parent-teacher conferences or if it’s during the school day. In fact, when you make an appointment, you could let the family members know that you’d appreciate it if they’d come at their designated time so everyone has plenty of time for discussion.

Body Language
Eye contact is one type of non-verbal communication that varies among cultures. I had so many ELLs from the Dominican Republic and Puerto Rico who didn’t make eye contact with me when I was talking to them.  I knew they were showing me respect by keeping their eyes focused on the ground but other teachers didn’t understand that. They’d get angry or impatient, especially if they were disciplining a student for something, and say, “Look at me when I’m talking to you!” This is one of the most common cultural misunderstandings in schools. In other Latin American as well as Asian and Middle Eastern cultures, making eye contact is frowned on also.

Proxemics
This refers to the physical distance between people. In some South American and East European countries, people typically stand closer to each other than U.S. Americans do; this is also true of people in Arab and Middle Eastern countries. This may make some teachers or students uneasy because they’re not used to it.  I had a Turkish student who would stand very close to me and his other teachers when he was talking to us and they were uncomfortable when he did that. That was during his first year in the U.S. when he wasn’t familiar with American culture and his teachers didn’t know anything about Turkish ways of behavior. The opposite is also true – people from some other countries normally stand father away from U.S. Americans when talking to them.

Participation
In many cultures, especially East Asian ones, students are expected to sit quietly and listen to what their teacher says. The teacher is considered the expert and it would be disrespectful for students to question what the teachers says. That contrasts with the expectation in American classrooms that students will actively ask and answer questions. If an ELL is sitting quietly and paying attention, it could be a sign of respect rather than a lack of interest.

Helping Other Students Do Their Work
When teachers assign homework in U.S. classrooms, the usual expectation is that students will do it on their own unless it’s specifically and intentionally meant to be done with other students or family members.  But in other cultures, the concept of the group is more important than the concept of the individual, and helping others to complete an assignment is an acceptable practice. Many of my Caribbean students who came to my before-school homework club shared their homework and let their friends copy their answers.  A couple students who were new to the U.S. didn’t know that that was not acceptable until I told them. You may also find this happening with students from other Latin American, Asian, African, and Middle Eastern cultures.

Writing Styles
In the 1960s, the linguist Robert Kaplan published an article describing 5 styles of writing and grouped them according to which culture the writer came from. He differentiated between English, Semitic, Oriental (sic), Romance, and Russian rhetorical styles. And although his notion has been challenged over the years, the key point that people from different cultures use different rhetorical styles in their writing is still valid. What this means in the classroom is that not only will some students, for example, write quotation and punctuation marks differently (angled quotations are used in French; the period is put outside the quotation mark in British English), but how they organize a piece of writing may also be different from the way students are taught in the U.S.

Plagiarism
In Ancient China, obtaining a high score on the civil service examination to become a government official meant being able to write down verbatim what Chinese scholars and philosophers had written in previous centuries. That legacy of being rewarded for copying means that in some Asian, as well as other cultures, the concept of plagiarism is very different. Unless it’s clearly explained, some ELLs may not understand why copying from other works is unacceptable in American schools. When teaching students from other countries, explicitly defining and giving examples of how to cite other’s work correctly will help your students understand how to avoid committing plagiarism.

Students’ Use of Their Native Language
Using English all day long in school is tiring for ELLs, particularly those who are less proficient in English.  When ELLs use their native language with their friends, it is usually just because it’s easier and more comfortable for them to communicate that way. Other students often think ELLs are talking about them when they hear their classmates speaking in another language but that is rarely the case. Unfortunately, it’s not unknown for some teachers or staff members to chastise ELLs and tell them to speak English. But as a matter of fact, in a 2015 “Dear Colleague” letter from the Departments of Justice and Education, schools were reminded that they “(m)ust not prohibit national origin-minority group students from speaking in their primary language during the school day without an educational justification.” Culturally diverse students are often (but not always) linguistically diverse as well and being able to use their native language should be celebrated, not criticized. For more reasons why students should be allowed to use their native language in school, please read my blog post here.

One way to celebrate students’ native languages is to display greetings in other languages in your classroom or in a hallway in your school. These bundles of resources give you 3 ways to greet your students, their caregivers, and community members in 26 languages commonly spoken in U.S. schools.

If you have a classroom with students from many cultures, it would be difficult to become familiar with the intricacies of every culture represented.  However, knowing what some of the major differences are between your students’ cultures and your own culture will help you be a better teacher for your ELLs.  And when you’re teaching in a culturally sensitive manner, your culturally diverse students will be more successful in your classroom.

Susan has always been interested in different cultures and majored in anthropology in college. She has lived and worked in Europe, Africa, Asia, and North America and has 25 years experience as an ESL/EFL teacher and teacher trainer, most recently in Massachusetts where she taught English Language Learners in Grades K – 8 at a public school for 16 years. Now living in Arizona, Susan specializes in creating low-prep resources for Mainstream and ESL teachers that develop the academic content and language skills of all students. In her free time, she enjoys playing table tennis, taking photographs of the Southwest, and cooking recipes from historical cookbooks. You can follow Susan at her TpT store, and you can find her on Pinterest, Facebook, and Twitter, where she co-hosts the monthly #ELLEdTech chat.
Visit her TpT store