This post originally appeared on the blog The ESL Connection.

“The conquest of learning is achieved through the knowledge of languages.”
— Roger Bacon, 1220 – 1292 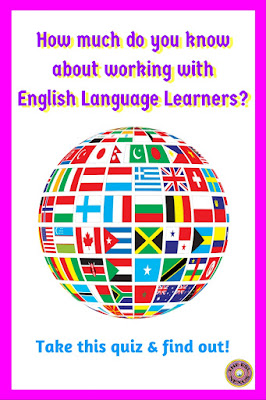 Decide whether each of the 8 common assumptions in the list below is True or False.
1) Using English all the time at home helps ELLs learn English faster.
2) ELLs should learn to read first in English instead of in their native language so they don’t get confused.
3) ELL parents don’t come to school conferences because they don’t value education as much as other parents.
4) Most ELLs come from low-income backgrounds with low-educated parents.
5) ELLs will learn enough English in one year to do well in school.
6) When ELLs make grammar mistakes while speaking, it’s best to correct them right away so they don’t make the same mistake again.
7) ELLs who don’t know much English benefit from being retained a year because that lets them catch up language-wise.
8) Good teaching is all that’s needed to help ELLs succeed in school.

How’d you do? Let’s find out! The answers are given after each statement and then more information is provided so you can learn why the assumptions are True or False.

1) Using English all the time at home helps ELLs learn English faster.  This is… False.
* The parents or guardians of ELLs, and any other relatives living in the household, should use the language they are most comfortable with, so all family members can easily communicate with the child.
* If their native language is stronger than English, the adults will model correct language patterns for their children instead of potentially using English with grammatical mistakes that the children will learn.
* When adults use their native language, the children absorb sophisticated language patterns and vocabulary and this will transfer over to learning English.
* Although there may appear to be a delay in learning English when a student is learning 2 or more languages simultaneously, the brain can distinguish between the different languages and the student’s language skills are ultimately stronger when he or she is bilingual.

3) ELL parents/guardians don’t come to school conferences because they don’t value education as much as other parents.  This is… False.
* Many parents/guardians of ELLs don’t attend conferences because they are intimidated by American schools and don’t feel comfortable there.
* In many cultures, teachers are seen as the authority who knows what’s best for the child and not being involved is actually a sign of respect by the parents.
* Many ELL parents/guardians are nervous or embarrassed about their proficiency in English and don’t attend school functions because of that or because they don’t understand what the teachers say or what the activities are all about.
* Many ELL parents/guardians would like to be more involved but they work 2nd or 3rd shift and can’t attend evening or afternoon functions, or they would forfeit pay if they left work during the day.

4) Most ELLs come from low-income backgrounds with low-educated parents.  This is… False.
* It is impossible to generalize about the socio-economic and educational backgrounds of ELLs because of the wide range of their circumstances.
* While many ELLs do come from a low-income background, that is not the case for all ELL families. For example, the parents of some ELLs may be visiting professors at universities who brought their families with them for the duration of their stay in the U.S.
* The adults in some ELL families may be highly educated but unable to get an equivalent job in the U.S. Perhaps their English language proficiency is not high enough, perhaps they are not able to pass the qualifying exams for their profession, or maybe they are just unable to find a job in their field.

5) ELLs will learn enough English in one year to do well in school.  This is… False.
* It’s true that many ELLs can learn enough English in one year to communicate reasonably well in social and interpersonal contexts, such as at lunch, at recess, and on the bus going to and from school.
* But learning academic language, such as the language used in social studies, math, and science often takes 5 – 7 years because of the specific and technical vocabulary involved, the content-specific styles of writing, and the more advanced grammar structures used in textbooks and writing.
* ELLs may appear to be fluent in English after one year because they speak fluently, may not have an accent when speaking (especially if they are not yet teenagers), and seem to understand everything they hear. However, a close look at their academic work often reveals that they are not making the same kind of progress as their native-English speaking classmates.

6) When ELLs make grammar mistakes when speaking, it’s best to correct them right away so they don’t make the same mistake again.  This is… False.
* Stopping an ELL in the middle of talking to correct a mistake interrupts the conversational flow and makes it hard to communicate effectively.
* When ELLs’ oral language is continuously corrected, they may become nervous or unwilling to speak out in class for fear of making a mistake, which won’t help them improve their oral communication skills.
* As long as the ideas being conveyed can be understood by the listener(s), it isn’t necessary to correct every single error. But if someone doesn’t understand what an ELL is saying because of a grammar mistake, then the error should be corrected. Or if an ELL makes a mistake in using a grammar structure that has already been taught, then pointing that out can be helpful so the ELL knows how to use that structure correctly.
* Other grammar errors that are made can be noted by the teacher and addressed in a systematic manner at a later time.

7) ELLs who don’t know much English benefit from being retained a year because that lets them catch up language-wise.  This is… False.
* If an ELL is not doing well academically in school and is behind his or her classmates, the student may not be getting the amount or type of ESL support he or she needs to be successful. Retaining the student will not change the situation if the reason is needing more ESL services.
* Just repeating one year is not going to help an ELL learn whatever grade level skills and content knowledge she or he didn’t learn the first time. ELLs need special instruction targeted to their language needs – keeping them back a year is not the solution to that issue.
* Retaining an ELL because his or her English language skills are not on grade level is considered discrimination on the basis of language origin and is a violation of the student’s civil rights. 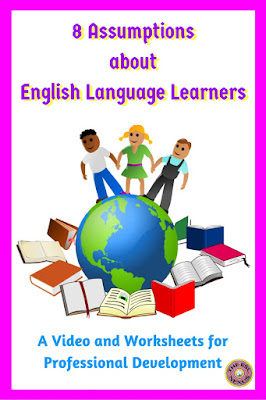 Were you surprised that every statement was false?  There are a lot of misconceptions about English Language Learners so I hope this information helps you work more effectively with your ELLs.

I’ve created a PowerPoint video with the information about these 8 common assumptions. There are 2 worksheets that you can download and use while you view it: the quiz itself and a page with a couple questions for reflection.  Just click HERE to access the video. 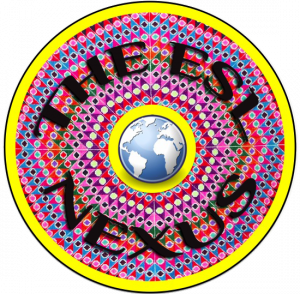 Susan has 25 years experience as an ESL/EFL teacher and teacher trainer. She worked at universities in China and Indonesia, language schools in the U.S., and taught English Language Learners in Grades K – 8 in Massachusetts for 16 years before moving to Arizona in 2014. Susan specializes in creating low-prep, academically engaging resources for mainstream teachers with ELLs in their classes that pull-out ESL teachers can also use. You can follow Susan at her TpT store and on her blog, Pinterest, Facebook, and Twitter, where she co-hosts the monthly #ELLEdTech chat.