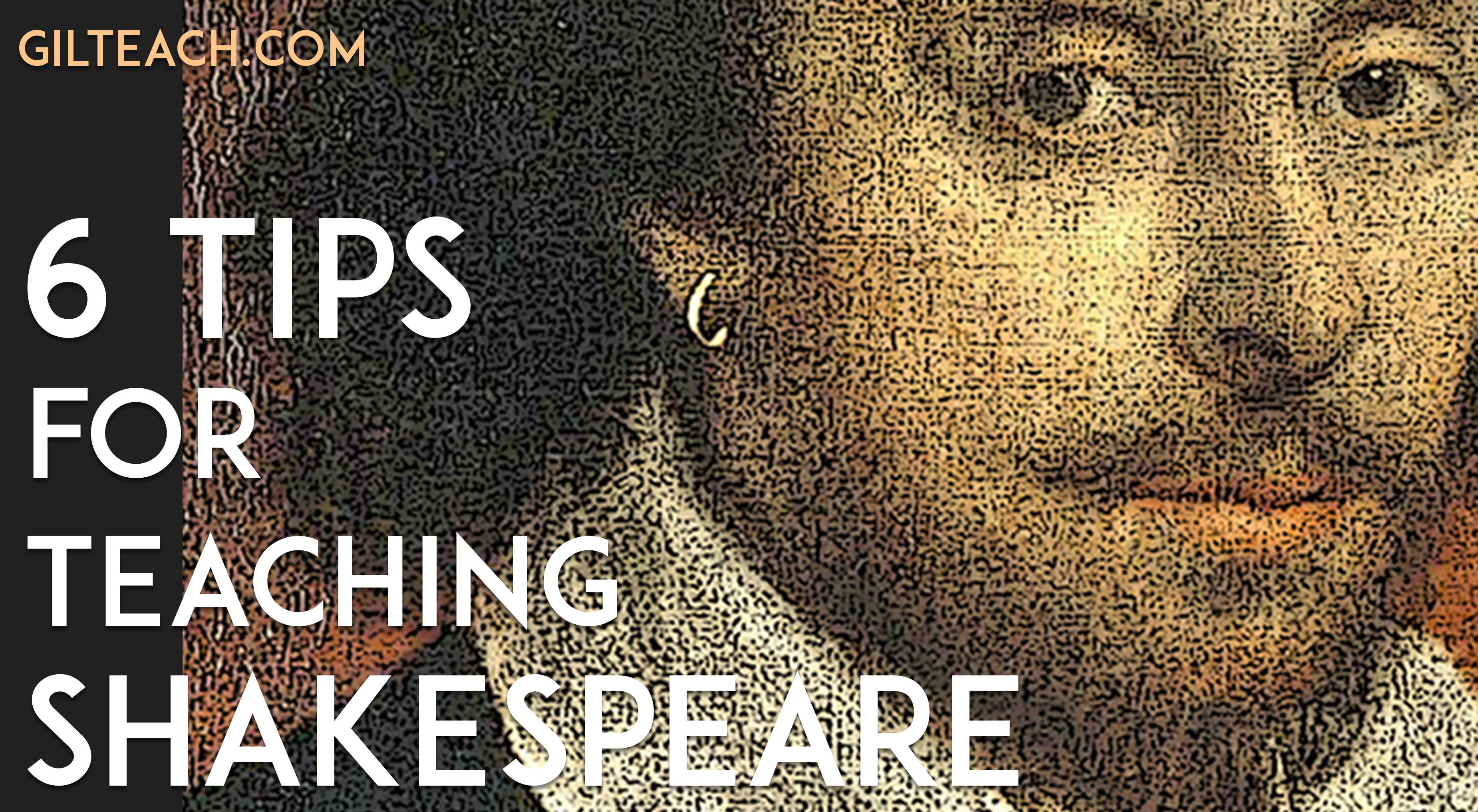 This post originally appeared on the blog Gil Teach.

Teaching Shakespeare is truly the highlight of the school year for me. And it’s not only because I love the Bard so much that I’ve tattooed a favorite quote on my arm.  It’s also because whether I’m teaching my beloved unit on Twelfth Night or any other play, the Shakespeare unit is a highlight for my students as well. It wasn’t always that way, and I have learned a lot over the years about how not to teach the Bard.

These are my dos and don’ts of teaching Shakespeare.

1. Don’t start with a PowerPoint about Shakespeare’s life and times. This is the kind of superficial knowledge that might sound good if a student is at a cocktail party some day, but it is not going to help them actually understand or appreciate a play. Having them sit passively and listen to information is also a great way to get students to turn off and tune out.

Instead, have students think about the issues from the inside out. I like to start every Shakespeare play with fictional prompts. I write down five to ten scenarios that will actually happen in the play. (So, for example, when we read Romeo and Juliet, I might write something like “A girl meets a boy she likes and her parents say that she can never see him again” or “A man’s best friend is killed and he vows to get revenge.”)  Then, students choose one to write from the point of view of any one character. When we get to that part of the play, it’s as if they are reunited with an old friend — they remember and understand what’s going on. As a result of starting each play this way, students realize that the issues and problems of the people living in Shakespeare’s plays are not that different from what they might face in their own lives.

2. Don’t assume that the movie version that looks most authentic is the best. In my teaching of Romeo and Juliet, I came across the 1968 version of the play. Yes, the hair and costumes are lovely, but the Franco Zeffirelli version also portrays Romeo and Juliet as romantic and beautifully tragic. Not really the message about suicide that I want to portray to my vulnerable teenage students. Similarly, the Mel Gibson version of Hamlet also has some great period-perfect looks, but I want to stay away from a version in which every female character is evil or weak.

Instead, give some of the more modern-looking adaptations a chance. I truly love the Baz Luhrmann version of Romeo and Juliet from 1996 (aka the Leo version). Yes, he takes more liberties with the plot, but he also creates a more comprehensive and thoughtful portrayal of the way that two teenagers rush into things and make lots of stupid mistakes that could be avoided. Kenneth Branagh’s version of Hamlet, while not visually perfect to the time period, is a much more rich portrayal of the play. I particularly like Kate Winslet’s Ophelia, who is not a weak girl by any stretch of the imagination.

3. Don’t explain what the play means. If at any time you find yourself lecturing to your classes about symbols, metaphors, or any other English-y thing, stop immediately. As Benjamin Franklin wisely said, the best way to make sure someone forgets something is to tell them about it.

Instead, let them figure it out on their own. I realized long ago the value of having students read and work through the text themselves —even a text as challenging as Shakespeare. I give them specific questions, and when needed, point to the specific lines where they can find what they need. But then I let them figure it out for themselves. My goals aren’t that they memorize my ideas about the play, but rather that they gain the skills and confidence to read and understand the play without me.

4. Don’t have students read the play out loud. I know that this is not a view shared by many teachers — and if you can pull off a student reading of the play, more power to you. But in my experience, a great way to kill the drama is to spend hours listening to teenagers drone through the reading when they don’t yet have any idea what they are saying.

Instead, let them read along to professional actors. I am a huge fan of the Arkangel recordings — they even have sound effects! I have found that when students listen to actors who actually understand what they are saying, they get a lot more out of the reading and actually have a pretty easy time comprehending. They know when something is sad or funny or shocking — just from the tone of the actors’ voices.  And learning to comprehend meaning through intonation is an important skill as well.

5. Don’t cover the play with discussion only. This is another mistake that I made for a long time. I love discussion — so that must mean that everyone else does, right? But this method of teaching leaves out a number of students who don’t learn this way.

Instead, give less extroverted students a chance to write about their ideas. I make a point to integrate freewrites or reading logs into every class plan. This is a great way to let students who don’t process out loud figure out what they think about an idea.

6. Don’t end with a boring essay on a yes or no question. If you have done all the work that it takes to get students to appreciate, understand, and enjoy a great work of art, the last thing you want to do is kill that experience with a boring essay that tasks them with going through the motions of making an argument. Essays like “Does Hamlet do the right thing when he kills his uncle?” or “How important is the setting to the play?” will kill students’ excitement pretty quickly.

Instead, have students grapple with a small piece of the play in groups.  I like to have my classes end our unit on a Shakespeare play by completing a cooperative creative writing project in which they write a modern translation of a scene from the play, working together to translate as well as modernize the themes of the scene. It’s a great way to achieve my long-term goals for the unit: I want my students to feel confident enough to view or read a Shakespeare play on their own, without any hand holding from a teacher.

Of course, you will likely make many many mistakes as you teach a Shakespeare unit to your classes — it’s the only way that you’ll learn what works for you and your students. But taking note of what works and why will help you grow in teaching whatever you decide to tackle this year. Christina Gil was a high-school English teacher for 16 years, but she recently left the classroom to follow a dream and move with her family to an ecovillage in rural Missouri. She blogs about empowering students to find their own answers at GilTeach.com.

She believes that analyzing a poem with 20 17-year-olds is a fabulous way to spend an hour or so, that teenagers should celebrate the epic battles of their lives, and that Shakespeare is always better with sound effects.

When she is not busy milking goats or working in the garden, she can be found homeschooling her two kids or meeting with her neighbors about the best way to run their village.