5 Ways Countries Do Math Differently Than the U.S. (And Why It’s Important to Know This) 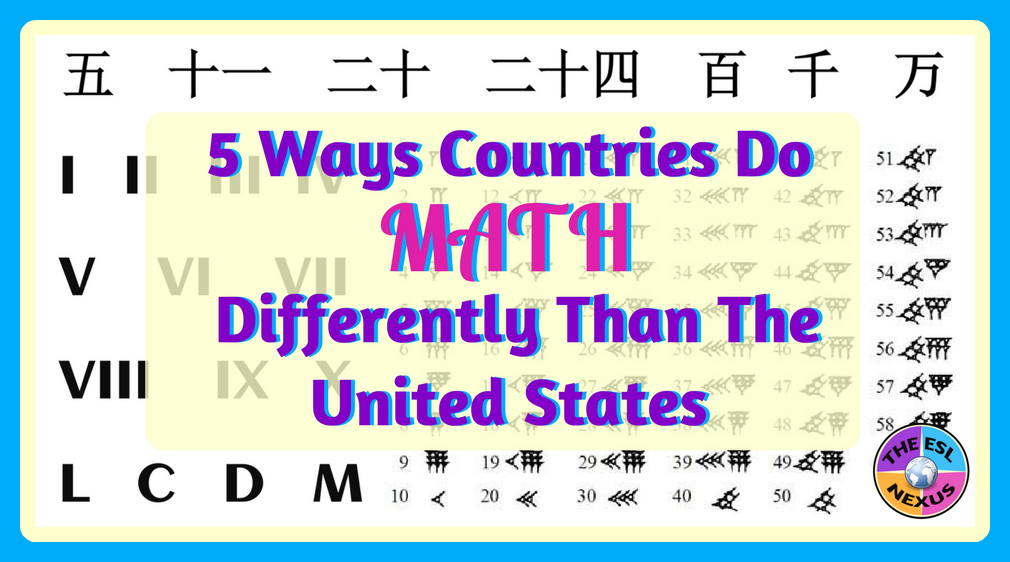 “When Europeans first came to Africa, they considered the architecture very disorganized and thus primitive. It never occurred to them that the Africans might have been using a form of mathematics that they hadn’t even discovered yet.”
— Ron Englash
When I was in 5th grade, my math teacher showed the class how to write the number 7 in a different way from what I was used to. She told us that was how people in France wrote it. I was learning French at the time so ever since, I’ve crossed my sevens. When I became an ESL teacher, I discovered there were even more differences between how math was done in the U.S. and how it was done in other countries.

This is essential to know if you have ELLs in your classes who learned math in foreign countries. They may be getting the correct answers to problems but they may not be able to explain how they got those answers if their proficiency in English is low. And if some teachers are not familiar with or don’t understand the processes used to find those answers, they may not be willing to give credit to students for their work.

But being able to demonstrate understanding of the procedures used to obtain the correct answers to problems is an integral part of American math classes nowadays. If the work doesn’t conform to the way it’s supposed to be done, students might not get full credit even if the answer is correct. This is especially important to keep in mind during standardized testing season. Even though getting the right answer — regardless of how it is achieved — should be paramount (in my mind, anyway), the process is now just as important as the result so ELLs have to be able to show their work and describe how they obtained their solutions to problems.

Here are some of the ways that ELLs may be doing math differently from the way it’s taught in American schools:

Use of additional words for certain number expressions:
Some countries, such as India, have words for number groupings that we don’t have in the U.S.:
* The word lakh refers to “one hundred thousand” and people say, for example, 5 lakh to mean 500,000.
* The word crore refers to “ten million,” so 8 crore means 80,000,000.
When I was in India and read these numbers in newspaper articles or heard them in conversation, I always had to pause and do a conversion in my head because I wasn’t used to the concepts.

How the numbers are expressed:
On the other hand, in some languages, such as Chinese, the words used for numbers above ten are compound words comprised of just the two number words placed next to each other.
* So instead of learning completely new words that aren’t literal representations of the numbers, like “eleven,” Chinese just puts the words “ten one” together to mean “eleven.”
* To say “twenty-four,” it’s the words “two ten four” said consecutively.
When configured that way, it’s easy to understand the concept of place value and to use arrays.

How to do multiplication:
* At a school in Kolkata, India, I saw a demonstration of how Indian students are taught to multiply two- and three-digit numbers. This video explains how to do this form of Vedic math.
The Indian teachers insisted it was a much better way of doing multiplication.

How to do division:
* An American student explains in this video how people in Spain and 10 other countries do long division.
* And here’s a video showing how division is done in France.
Some of my students from Latin America did division differently from how I’d been taught and it was eye-opening to see the process they used to reach the correct answer.

I think it’s fascinating to discover how math is different throughout the world. When ELLs can teach their teachers how it’s done, then the students are learning how to use the language of math in English and the teachers are expanding their cultural knowledge, and the result is that everyone benefits.

Susan has 25 years experience as an ESL/EFL teacher and teacher trainer in Asia and the U.S., most recently in Massachusetts where she taught English Language Learners in Grades K – 8 at a public school for 16 years. Now living in Arizona, Susan specializes in creating low-prep, content-based, academically engaging resources for mainstream teachers with ELLs in their classes and ESL teachers who pull ELLs out for class. In her free time, she enjoys taking photographs of the Southwest and recently rediscovered the joys of playing table tennis. You can follow Susan at her TpT store and can also find her on Pinterest, Facebook, and Twitter, where she co-hosts the monthly #ELLEdTech chat.

About TpT
TpT is an open marketplace where educators buy, sell, and share original teaching materials. Join our community of educators and
share ideas, inspiration, and connect with teachers from around the world!