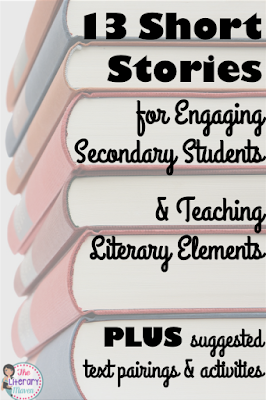 Don’t let your literature anthology dictate the short stories you read with your middle school and high school students. There are so many wonderful short stories out there, many of which can be used to teach a variety of literary elements and paired with other texts. Here are 13 of my favorites.

1. The Sniper by Liam O’Flaherty
I’m always looking for texts that will draw in my reluctant male readers. Anything with war, guns, or a little violence ups the appealing factor immediately. “The Sniper” is set in the 1920s during the Irish revolution. A sniper is stationed on a rooftop contemplating how he will get down before the light of dawn exposes him. I often use this text when teaching irony because of its unexpected ending. It is also a great piece to use for reviewing plot as the climax appears at the very end of the story; students sometimes struggle to correctly identify the climax when it happens so late in a story. The story’s theme emphasizes the senselessness of war, making it perfect for pairing with other short stories or novels with a similar theme such as The Red Badge of Courage by Stephen Crane, Catch-22 by Joseph Heller, or The Things They Carried by Tim O’Brien.

2. The Gift of the Magi by O. Henry
This short story is one that I like to read just before the holidays because of its message about giving and thinking of others. Like “The Sniper,” it’s a great piece for teaching irony and reviewing plot. I also like to focus on how the setting dictates many of the details in the plot. After reading, I challenge students to write a modern retelling of the story, paying careful attention to how an updated setting affects the plot. The story’s connection to the holidays and its message about what we should value most make it perfect for pairing with A Christmas Carol by Charles Dickens.
3. The Interlopers by Saki
“The Interlopers” is a short story that is sure to hook reluctant readers. It is set at night and focuses on a long-standing turf war. The two main characters are out in the forest, the disputed territory, hunting each other, but as the two men meet, a tree falls and traps both of them beneath it. The twist at the end of the story makes it another great text to use for teaching irony and reviewing plot. The text’s focus on a long lasting conflict between two families connect it with works like William Shakespeare’s Romeo and Juliet and Mark Twain’s The Adventures of Huckleberry Finn (the Grangerfords versus the Shepherdsons), and the real life conflict between the Hatfields and the McCoys. 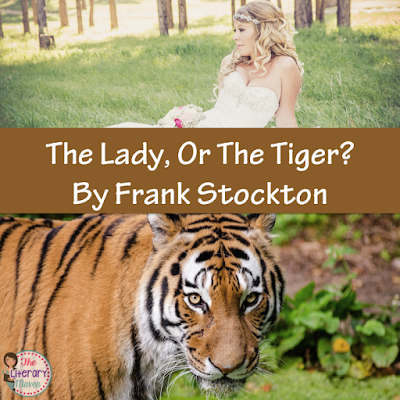 4. The Lady, or The Tiger? by Frank Stockton

This is one of my absolute favorite short stories to dig into. “The Lady, or The Tiger?” centers around a justice system in which the accused determine their own fate by choosing between two doors in an arena. Behind one is a lady (marriage is the reward for innocence) and behind the other is a tiger (death is the punishment for guilt). The plot intensifies when the king of the arena discovers that his daughter is in love with a commoner and puts that man on trial. To help my students understand the king’s system of justice, I created a simulation in which each student is assigned a crime and gets to choose a door to determine their innocence or guilt. Later, students reveal whether they actually committed the crime of which they were accused.

This leads to discussion about the fairness of this justice system and comparison to the fairness of our own. This short story would be a great lead-in to any text centered around a court case like

To Kill A Mockingbird by Harper Lee or Inherit The Wind by Jerome Lawrence and Robert Edwin Lee. There is often something current in the media related to the justice system that can be connected to the story as well.
5. American History by Judith Ortiz Cofer
Literary criticism can be a complex idea to introduce to students. I always start with the most basic two approaches: historical and biographical, using this short story, which is focused on the day of President John F. Kennedy’s assassination. The united feelings of Americans and even the global community, are contrasted by the racial and socio-economic discrimination faced by the main character. The short story could be paired with news articles and other nonfiction readings about this event. To bring things into the 21st century, you could use a novel like Love is the Higher Law by David Levithan, which centers around the events of September 11th.
6. Through the Tunnel by Doris Lessing
This short story is full of imagery and symbolism, and also great for teaching the different types of conflict. The main character struggles against himself, his mother, other boys, and forces of nature. Like most young people, the main character wrestles with being viewed as a child when he wants to be treated like a young adult. Another short story that pits child against parent and incorporates many of the different types of conflict is “The White Umbrella” by Gish Jen.
7. Geraldo No Name by Sandra Cisneros
“Geraldo No Name” is one vignette from The House on Mango Street by Sandra Cisneros. It does not include
the novel’s main character Esperanza, but instead focuses on Marin, an older girl Esperanza idolizes, and Geraldo, a young man Marin meets at a dance. Like “American History,” the short story centers around issues of race and class. Geraldo is hit by a car and Marin believes that if he were treated differently at the hospital, his life might have been saved. This short story could be paired with the film Fruitvale Station or any current news articles about the Black/Brown Lives Matter movement. 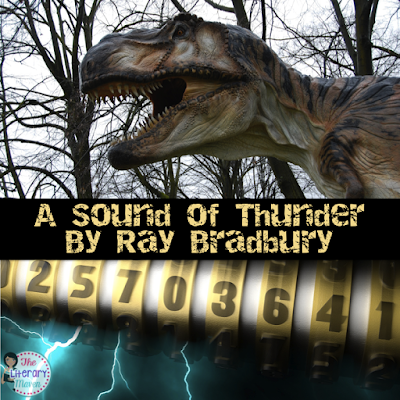 8. A Sound of Thunder by Ray Bradbury
The idea behind this short story has always fascinated me. If we could travel back in time, how would it affect the future? In Ray Bradbury’s text, time travel takes the characters to the prehistoric age of dinosaurs and one misstep has innumerable effects on the future. It’s a perfect illustration of the butterfly effect. You probably can’t show your students the Ashton Kutcher film of the same title, A Butterfly Effect, but the movie Groundhog’s Day is a much lighter treatment of the same idea as are the films Frequency and Big.

9. The Scarlet Ibis by James Hurst
“The Scarlet Ibis” is probably my all time favorite short story. I remember reading it as a ninth grade student and was delighted to find it in the literature anthology I used as a ninth grade teacher. The story is full of beautiful imagery that contrasts the heartbreaking end to the relationship between the two brothers. It’s a great text for examining foreshadowing, the author’s use of symbolism is clear, yet multi-layered, and the story can also be used to introduce allegory by discussing the author’s attitude toward war. The power dynamics between the older and younger brother could be compared to George and Lennie’s relationship in Of Mice and Men.
10. The Black Cat by Edgar Allan Poe
Edgar Allan Poe is known for his creepy tales and “The Black Cat” does not disappoint. The narrator, a crazy drunk, takes drastic measures to get back at his cat, which he believes is ignoring him. This is an excellent short story to use for analyzing first person point of view and unreliable narrator. After reading, challenge students to rewrite the story, still using first person point of view, but from another character’s perspective.
11. The Stolen Party by Liliana Heker
“The Stolen Party” is another great short story for teaching point of view, specifically third person limited point of view. Because the character that the narrator focuses in on is a young girl, her thoughts and feelings are unreliable and may skew students’ understanding of the story until the final event. Like with “The Black Cat,” after reading, you can challenge students to rewrite the story still using third person limited point of view, but focusing in on another character’s thoughts and feelings. 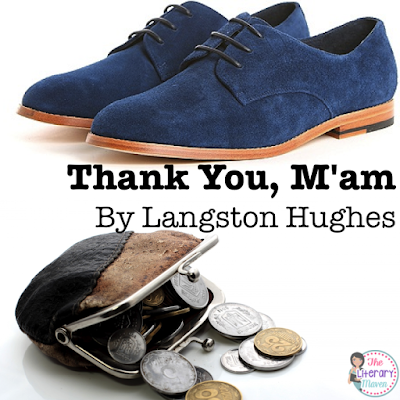 12. Thank You M’am by Langston Hughes

While reader’s theater is traditionally used in primary classrooms, “Thank You M’am” is the perfect short story to act out or at least read aloud. Mrs. Jones is a tough elderly woman who is full of sass, while Roger is a shaken young man who quickly regrets his attempt to steal Mrs. Jones’s purse. It is also a great text for teaching conflict and characterization.
13. The Most Dangerous Game by Richard Connell
“The Most Dangerous Game” is another excellent short story if your students like suspense. The tension in the story begins as the main character sails past an island with a terrible reputation and builds when he lands on the island by mistake and meets the man living there. At the start of the story, you can focus on how the details of the setting help to create mood. It’s also an excellent text for introducing and having student complete a plot
diagram.
You can find all of my resources for teaching short stories here.

After teaching middle and high school English for eight years, Brynn Allison currently specializes in delivering literacy interventions for grades 3-8. Her past and present work as an educator has emphasized the need for differentiation in the classroom. You can find resources that support all levels of students, especially struggling readers and writers, in her TpT store. Brynn co-hosts a #2ndaryELA Twitter chat and Facebook group to support middle and high school English Language Arts teachers. You can find her writing about teaching and young adult literature on her her blog, or connect with her on Facebook, Twitter, Instagram, and Pinterest.